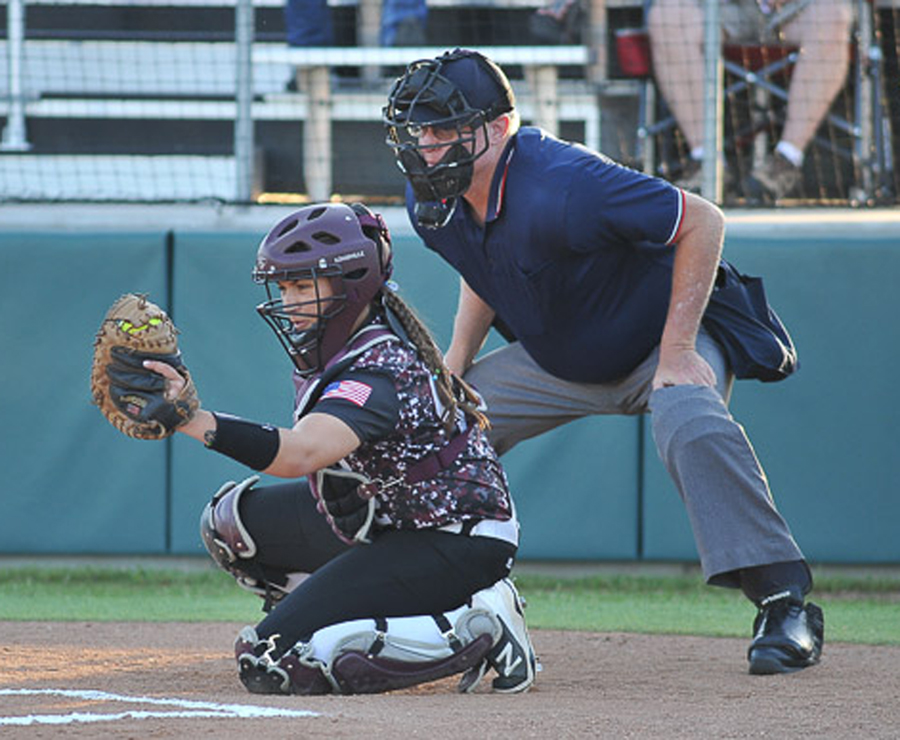 Wylie's Alexis Perry frames a perfectly thrown strike from Annie Gunther against Denton Guyer in a Class 6A Region I quarterfinals contest last Friday at Denton Braswell High School. Wylie pulled out the 5-4 win in nine innings. For the story and additional photos see this week's Sports.

AUBREY – It’s been said that three is a magic number, and seven is a lucky one.

That was certainly true for Wylie softball on Friday, May 11 at Braswell High School, where the Lady Pirates faced district rival Denton Guyer for a third time this season – they lost both previous District 6-6A contests – and were entering their seventh regional quarterfinal; they lost in the previous six.

This time around, the Pirates (28-7 overall) prevailed over the Wildcats, 5-4 in nine innings, and finally made their way to the regional semifinals.

In this case, that’s the Class 6A Region I semifinal against two-time defending state champion Keller.

“They are a really strong hitting team are going to be stiff competition,” WHS head coach Heather Damron said. “When you get to this point of the season anything can happen.”

Wylie made it to the fourth round after a stellar showing in the regional quarterfinals on the heels of timely hitting, along with standout defensive play that featured two put outs at home plate.

For the full story see the May 16 issue or subscribe online.

Please share and pray for these missing children! 🙏🏻For the past 12 months our posters have shown the following number of children:Total Missing children: 80Found: 61 Still Missing: 14 Found but missing again: 5 Thank you for your support and prayers! ... See MoreSee Less
View on Facebook
· Share

The Texas Department of State Health Services released updated COVID-19 information for Feb 4. All counts, except for hospitalized cases, are compiled from the TDSHS website. State officials listed ni
View on Facebook
· Share

Wylie East girls basketball was a perfect three for three during the week, putting them on the verge of a district title. The Lady Raiders, ranked No. 13 on the Texas Girls Coaches Association 5A poll
View on Facebook
· Share

The Texas Department of State Health Services released updated COVID-19 information for Feb 3. All counts, except for hospitalized cases, are compiled from the TDSHS website. State officials listed 10
View on Facebook
· Share