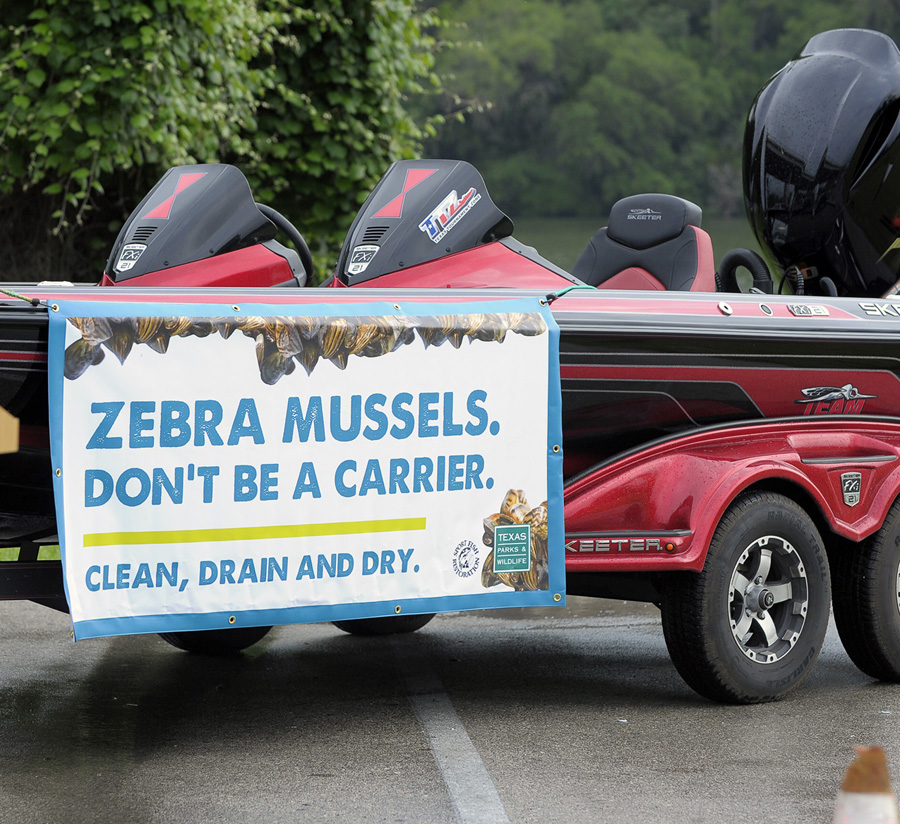 Boaters are being constantly reminded to clean, drain and dry their crafts to prevent the spread of the invasive species. 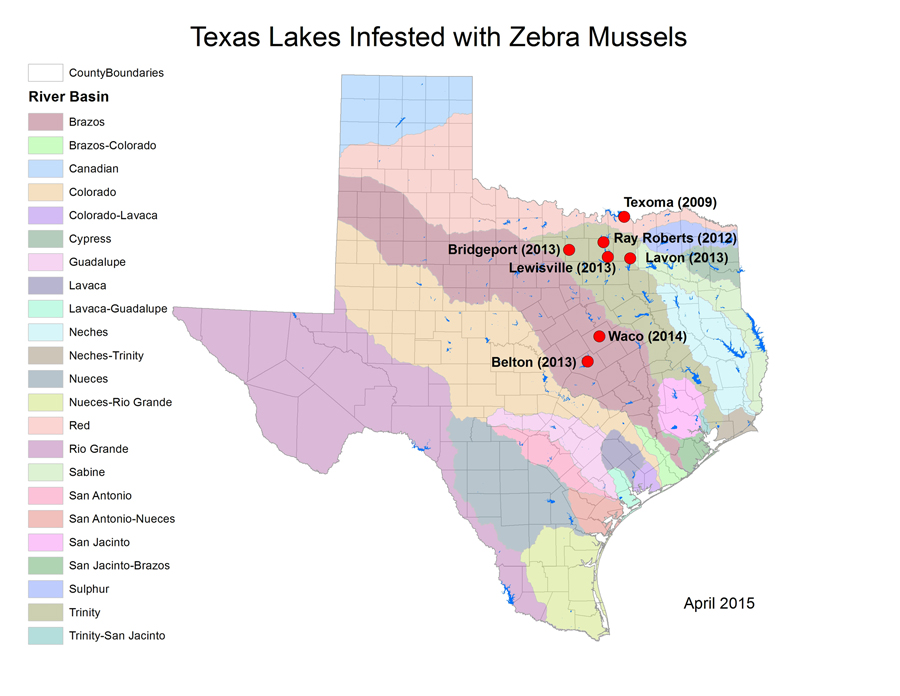 A map of Texas shows where zebra mussels have infested the state’s lakes.

Boaters are urged to clean, dry motors after exiting water

Texas boaters are being reminded their actions are critical in helping stem the spread of the invasive zebra mussels.

Despite recent flooding, which some feared might spread the dangerous nuisance species, experts say boaters who clean, drain and dry their boats, trailers and gear before traveling from one Texas waterway to another are still a key to containing the costly problem.

Zebra mussel larvae, called veligers, are suspended in the water column for a month or so after spawning, and they are readily transported downstream with flowing water. This is especially true now, at a time of year when zebra mussels are spawning, because there are likely many veligers in the water, and they can be moved a long distance downstream in the flows the state is now experiencing.

“However, despite the danger of flood distribution, zebra mussels are also susceptible to rough conditions caused by floods, such as water turbulence, turbidity (cloudy water), and low oxygen levels,” said Brian Van Zee, Inland Fisheries Regional Director in Waco for the Texas Parks and Wildlife Department. “So these flood conditions could potentially help by causing high levels of zebra mussel mortality. Right now it’s hard to say what impact the flooding will have on zebra mussel populations. We probably won’t really know for months, as we continue monitoring efforts.”

Van Zee said that while flooding can spread zebra mussels downstream within the same river basin, the only way zebra mussels would likely move to another basin would be via boaters or interbasin transfers of water through pipelines from one lake or river basin to another.

Right now, the Red River, Trinity River, and Brazos River systems are the only basins where zebra mussels have been found.

“Besides the Red, Brazos and Trinity basins, all the other river basins in the state are still uninfested, and boaters’ actions are still absolutely vital to help prevent zebra mussels from spreading to any new river basins,” Van Zee said. “Boaters getting informed and taking action to help is still our best defense.”

Boaters won’t be unsupported in their efforts, as a coalition of river authorities, water districts and municipalities across the state, led by the Texas Parks and Wildlife Department, is investing more than $400,000 in a zebra mussel public information campaign; the largest such investment in public awareness since zebra mussels were discovered in Texas in 2009.

It is illegal to possess or transport any prohibited aquatic invasive species in Texas. Since zebra mussel veligers are invisible to the naked eye, boaters must drain all water from their boat and all receptacles on board when traveling on a public road to or from a public water body in Texas.

Originally from Eurasia, the rapidly reproducing mussels pose serious economic and recreational threats. They can clog water intake pipes, damage boats and motors by attaching to boat hulls and clogging water-cooling systems, completely cover anything under water, and litter the shoreline with their sharp shells. They can damage drinking water facilities and electric power plants, causing annual losses estimated in the millions of dollars.

Zebra mussels have been found in seven lakes in Texas since they were first discovered in Lake Texoma in 2009. Other infested lakes include Ray Roberts, Bridgeport, Lavon, Lewisville, Belton, and most recently Waco.

It’s worth noting that while this year’s rains have generally been good for boaters across most of Texas, flooding has caused boat ramp closures on many of the infested lakes, including Texoma, Lavon, and Ray Roberts, and some boat ramps on Belton and Waco. As the water recedes and boat ramps reopen on infested lakes, boaters should be vigilant about zebra mussels.

Information about zebra mussels can be found at http://texasinvasives.org/zebramussels/.

Video about zebra mussels is also available, including: