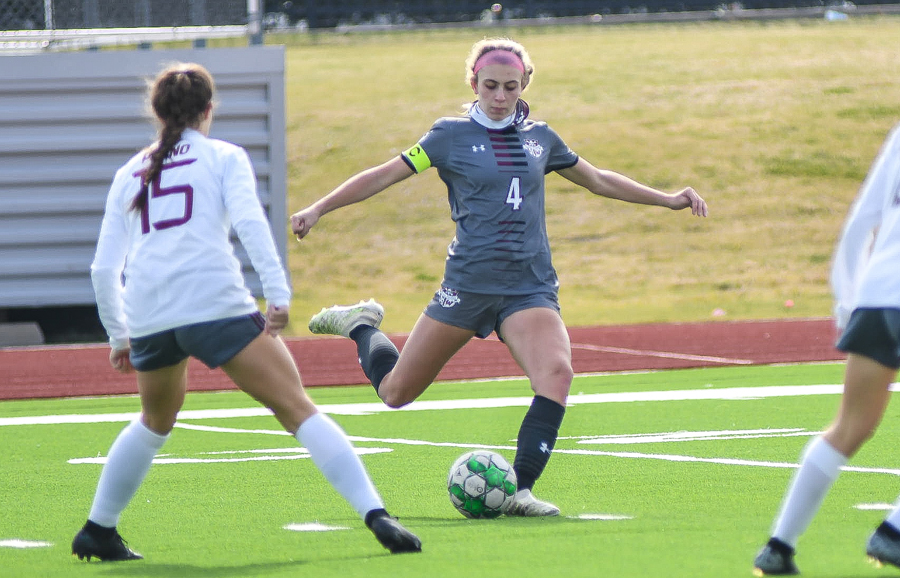 As the weather took away a week’s worth of games, District 9-6A is set to get back under­way.

As the season resumes and the teams prepare to make up lost time, the competition heats up for the district title and playoff positions. Five games into the district slate, two teams have al­ready set themselves apart in the boys and girls soccer leagues. Here is the top competition in district play.

The top team in the boys dis­trict play appears to be Sachse High School. The Mustangs stand at 10-2-2 overall and a perfect 5-0 in District 9-6A competition. Sachse continues to look a part of a dominant team in district play. They’ve now won seven in a row, five of which have come against Dis­trict 9-6A competition.

Elias Robles, for his efforts, has scored four goals in five district games, while Ethan Sampson has added three of his own. They have outscored their opponents 11-2 in district play thus far. The offense has been clicking on all cylinders, with goalkeeper Carlos Vasquez recording nine shutouts on the season while manning the goal­posts.

While sitting undefeated in district play, trailing Sachse is Rowlett in second place. The reigning district champion Ea­gles are historically one of the top teams in the area, reach­ing the postseason 18 times in a row. Rowlett graduated a bulk of its talent from the season before, including Kev­in Adolfo, who won multiple district MVPs and scored 79 goals during his tenure with the school. Understanding all of the talent lost, a step back for the Eagles could’ve been expected.

Instead, Rowlett has ex­celled, sitting at 4-1 in district play overall and 8-6-1 overall. They’ve been able to get four goals a piece from Andrew Martinez and Bryce Norris. It’s a well-balanced Rowlett attack that anyone on the team can score, but Rowlett has a neg­ative goal differential on the season and some bad losses early in the season. The Eagles didn’t get a chance to play their game against the Mustangs, but if they can continue their form, they can challenge Sachse for the district championship.

The last major challenger for the district championship in North Garland, who has played at a high level at 3-1 in district play and 4-3-4 overall. The Raiders have a young team but have found plenty of goal-scor­ing Angel Contreras and Eric Artega. North Garland won their first three district games, including a 3-1 win over Rowl­ett. The Raiders have outscored opponents by a score of 10-4. With these three teams at the top, it’s likely one of them will win the district title in the boys division.

Similarly, the girls division has a team that looks like a clear-cut favorite. That favorite is Wylie.

The girls soccer team re­mained undefeated in district play with a convincing 5-0 win over Naaman Forest on Feb. 9.

Amelia Leggett once again led the way in the goals depart­ment for the Lady Pirates, add­ing two more goals. That brings her total to nine goals in five district games. Morgan Brown was also able to score two goals and provide an assist, and Ally Stickney capped off the game with a goal of her own. Citlaly Santibanez and Emery Gilbert provided one assist each in the win.

Wylie finds themselves in the midst of an unstoppable run, winning seven matches in a row, including five in district play. In the games against their District 9-6A opponents, the Lady Pi­rates have outscored their ad­versaries 29-0. Currently, they look like the runaway favorites for a district championship in 2021.

Following the Lady Pirates, much like in the boys division, the Rowlett Lady Eagles sit in second place. While just 4-7- 1 overall, Rowlett has begun to find its form in their district slate, winning four of five. The Lady Eagles have outscored opponents by a score of 24-8 in district play but suffered a brutal 6-0 loss to Wylie in their lone meeting this season. Rowl­ett should reach the postseason in District 9-6A but have a long way to go in order to top Wylie.

Finally, there’s the Sachse Lady Mustangs, who also only have one lone district loss. They sit in third place after a few missed games at 5-2-1 overall and 2-1 in district play.

After having not played a game since Jan. 26, the Lady Mustangs picked up back-to-back wins before the weather stoppages. Much like Rowlett, they lost their opening district game to Wylie.