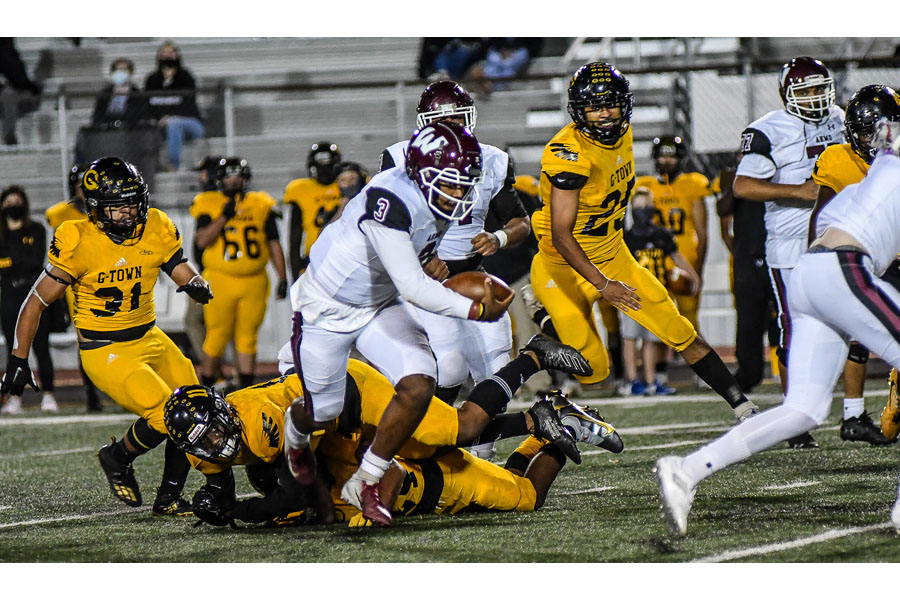 With less than two minutes and a four-point deficit, it seemed like Wy­lie had just run out of steam.

The Pirates led the entirety of the second half, including having an 11-point lead on twice in the sec­ond half. Garland continued to fight, however, behind quarterback Cergio Perez. They eventually found the end zone with 3:06 remaining in the game and took their first lead since midway through the first half, 49-45.

Wylie needed its offense to come through one last time.

Facing a third and short with just over a minute remaining, Wylie need­ed a big play and their senior quarter­back delivered.

Marcus McElroy, right after throw­ing an interception that gave Garland the lead, rolled to his left and had plenty of room to run for a first down. Instead, he kept his eyes downfield and found Brady Hogan-Lyall racing down the sideline.

A perfectly thrown ball to the back of the end zone fell into his hands and he absorbed the hit from the Owl de­fender to score.

For two straight weeks, the Pirates found some late-game magic. For Ho­gan-Lyall, his second reception of the season couldn’t have come at a better time.

Smiling at the end of the game, Pi­rates head coach Jimmy Carter could be seen with his hands on his knees saying, “I’m too old for this.”

“I told the kids at the beginning of the year we wanted to be construc­tion workers,” Carter said. “We didn’t want to be flamboyant people. There are no standout players. We’re not built for just one guy to get the ball or make the plays we all have to go out and execute. It’s just such a big play at the end.”

This was Wylie’s second fourth-quarter comeback victory in as many weeks. Led behind an offense that ran for 319 yards and capitalized on three Garland mistakes to win 52-49.

For the full story, see the Nov. 25 issue or subscribe online.