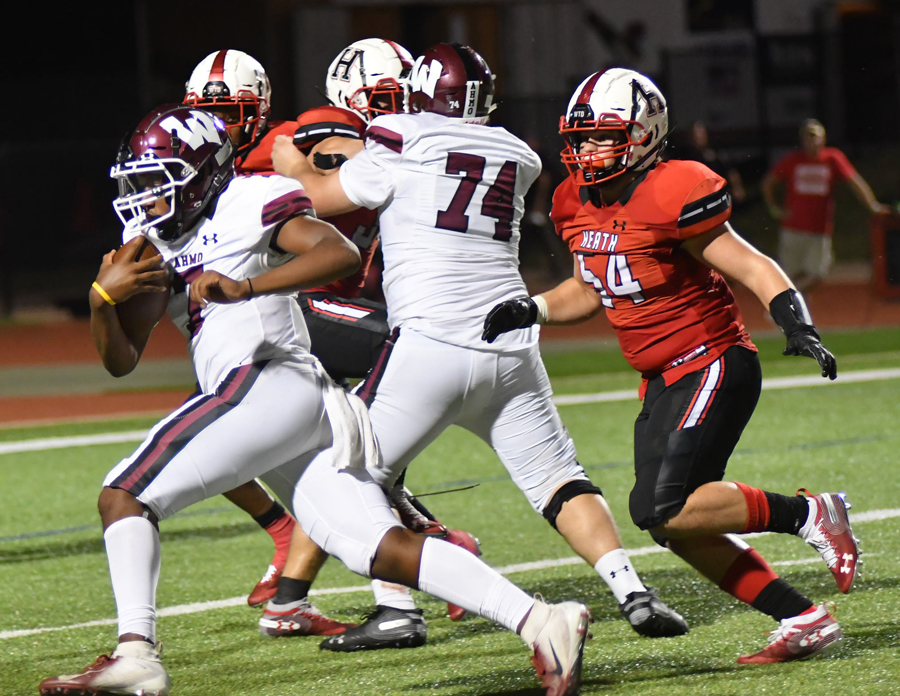 Marcus McElroy, Jr. breaks away from a Rockwall-Heath defender en route to a 5-yard touchdown on Friday, Sept. 6 at Wilkerson-Sanders Stadium. More photos at wylienews.com.

As high schools around the country gear up for the start of the 2020 season, there’s only one thing on their minds: have a better season than the last. For some, that means winning more games than the team did the previous year. For others, that means a deep playoff run. All of this starts with the most important position on the field, the quarterback. But how do we know what our local QBs will do this upcoming season? Let’s do a little preview.

Senior Cade Adamson leads the charge for the Raiders in 2020. Another strong-arm guy, Adamson is also a pitcher on the East baseball team. He shut down 10-5A district champs McKinney North striking out four Bulldogs to move the Raid­ers on to the Regional Quarterfi­nals in May of 2019. Adamson is a deep throw machine and his accuracy works wonders for the high-flying Raider offense. In a tough district that includes Longview, McKinney North and Highland Park, Adamson could be the factor that gets the Raid­ers over the hump.

2019 Season: 6-1 in District 9-6A, started 0-3 before winning six of their last seven in District with a notable win over district champs Sachse. Playoffs: Lost 24-0 to Prosper in the Bi-District round.

1st Team All-District selec­tion Senior Marcus McElroy stands tall for the Pirates in 2020. Splitting time early in 2019 before the starter went down, McElroy got hot and nev­er looked back. Deemed by his coach as the leader on the team, McElroy is solid at 6’1, 205 has quick feet to run and a big arm. He is a smart young man as he’s getting some Ivy league notice for his grades and athletic abil­ity. Head Coach Jimmy Carter said he is “real confident” go­ing into the season saying, “We don’t just want to play in No­vember. We want to win.”

For the full story, see the July 8 issue or subscribe online.