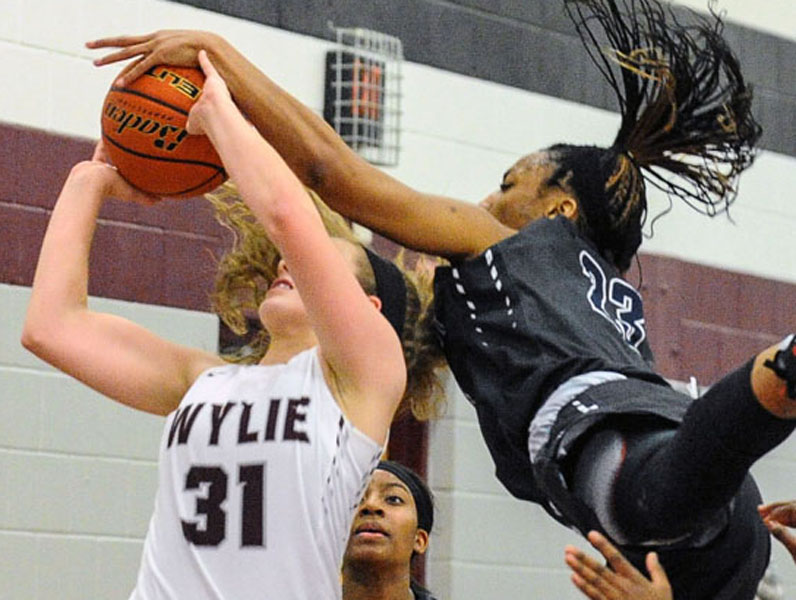 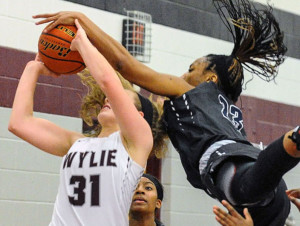 Evan Ghormley/C&SMedia Texas
Wylie East’s Shelli Thigpen (23) goes for the block against Wylie’s Madi Miller. The Lady Raider was called for a foul on this play, but that didn’t stop Thigpen and her teammates from claiming their first 10-5A victory of the season at the expense of their arch-rivals.

WYLIE — Round one of the crosstown battle between the Lady Raiders and Lady Pirates went to the former last Friday night in a 43-36 victory on Wylie’s home court.
The victory improved East’s record to 1-1 in District 10-5A, which includes a 33-30 loss Dec. 15 to McKinney North. The Lady Pirates fell to 0-2, a record that also features a 44-34 loss the same day to McKinney.
East was scheduled to play Tuesday at Prosper and will host Melissa on Dec. 29 before resuming district action on Jan. 5 against Lovejoy. Wylie hosted Denison on Tuesday, will play in a Dec. 28-30 tournament in Mansfield and then resume 10-5A action Jan. 5 at home against Prosper.
“We’re young and we played really well (against North),” East head coach Joel Zuniga said. “We didn’t feel too good about (the loss). We grinded one out tonight. I didn’t think we played very well, but it’s nice not to play very well and still get a win.”
For full story see The Wylie News at http://www.etypeservices.com/Wylie%20NewsID245/default.aspx.