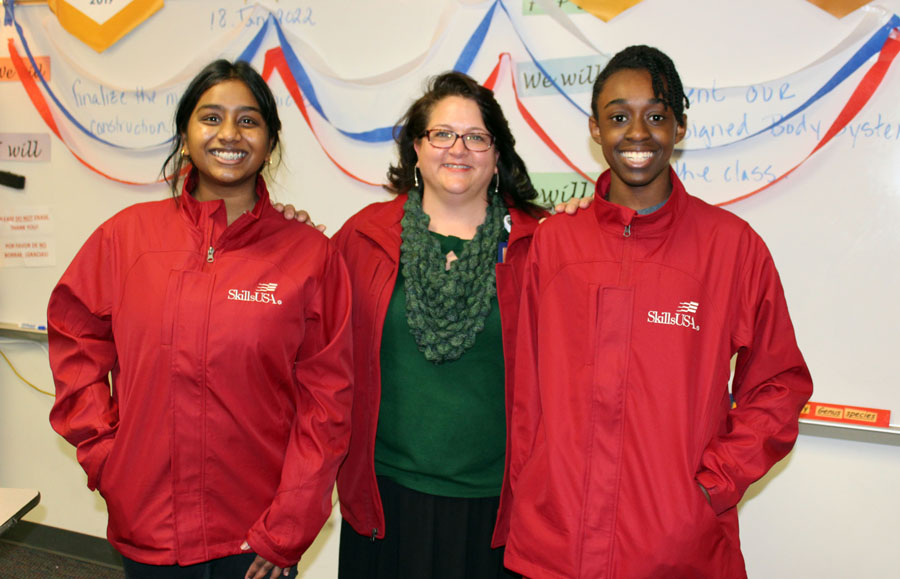 When Joanna Robertson launched the McMillan Junior High chapter of SkillsUSA in 2018, there were only two charter members. Since then, the team has amassed multiple national awards and currently has 39 members.

SkillsUSA is a nonprofit national education association for middle-school, high-school, college, and postsecondary students and is meant to prepare them for careers in trade, technical and skilled service occupations.

This year, recognition was awarded to two McMillan eighth graders, Joana Johnson-Henry and Jaida Simpson, for their participation in a nationwide SkillsUSA essay contest.

SkillsUSA reported they had 450 applicants in the Journey of the Jacket contest and only 50 jackets were awarded nationwide. Eight jacket recipients were from Texas, Joana and Jaida were the only middle school recipients.

The contest was titled “Journey of a Jacket” and required participants to write an essay explaining why they were members of SkillsUSA. Robertson, who is the chapter advisor as well as STEM and science teacher, wrote letters of recommendation for the 21 students who chose to enter the contest.

Jaida wrote, “I also joined SkillsUSA to get prepared for the workforce, to improve myself and to become a better person. In addition to preparing myself for the future, I also get to give back to the community.”

On Jan. 18, to celebrate the win, Robertson arranged a surprise party for Joana and Jaida. Members of the SkillsUSA team decorated the room while the winners were out of the room. When they returned, they were told they won the contest, and they opened boxes containing the contest prize, an official SkillsUSA red jacket.

“I was surprised by the party and that I won. I was very grateful,” Joana said.

Robertson stressed to the team that winning on the national level is an impressive accomplishment.

“It boggles my mind that two of our kids were chosen as national winners,” she said. “It is just beyond phenomenal. I am so proud of these girls I could just bust.”

Robertson is passionate about the benefits this extracurricular organization provides.

“I love SkillsUSA with all my heart,” the teacher said. “I love our framework, it’s based on personal skills, workplace skills, and technical skills and is grounded in academics.”

In addition to contests, the organization is active in the community. Their biggest community service project is building bikes for Wylie ISD’s Wylie Way Christmas and Holidays event.

“The kids assemble the bikes. they learn how to talk to each other, use tools and they get an end product that works,” Robertson said.

Robertson is deeply appreciative to former McMillan principal, John Peters, for having confidence in her that she could form and run a SkillsUSA chapter at their school.

“He believed in me and saw things in me that I didn’t see in myself,” Robertson said.

Now, she finds herself mirroring the spirit of encouragement to her students.

“When kids tell me they can’t do that, I tell them, ‘I know you can.’ I can hear him (Peters) in my head believing in me.”