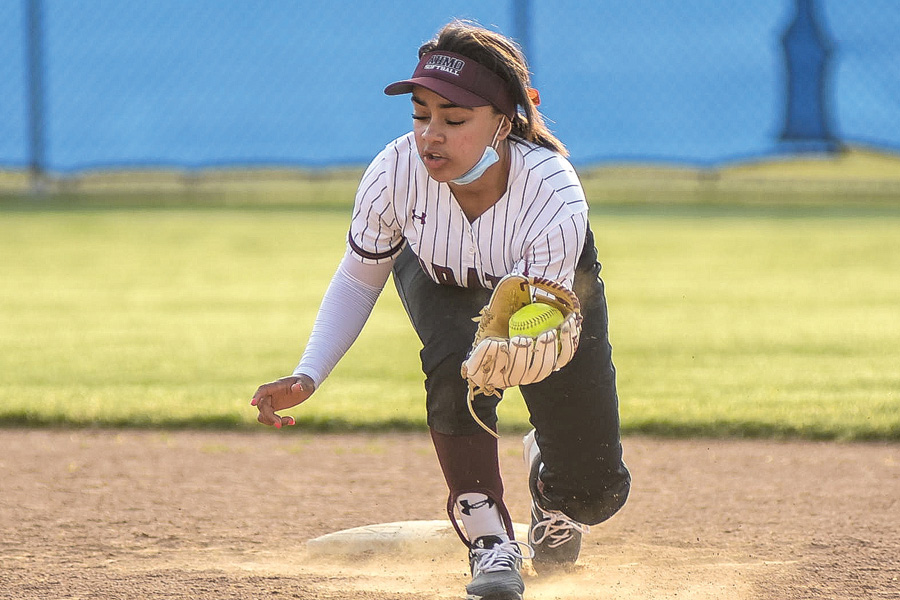 Aubrey Brown lunges to field the ground ball for the Wylie softball team in their 11-0 win over Sachse on April 6.

It was an eventful two weeks for the Wylie Lady Pirates, who won four games by a combined score of 66-0 to find themselves tied for first place in the District 9-6A standings.

On March 30, Wylie began its climb of the district stand­ings by dispatching Garland by a score of 15-0. The Lady Owls committed three errors in the game and the Lady Pirates took advantage with the long ball, finishing the game with three home runs, three triples and a double in seven of their 11 hits for the game.

Mikayla Hoffman doubled and tripled in the game while Sydney Murphy and Averie Gunther each had a triple and a home run in the victory. Jordyn Merrett also homered for the girls in the maroon and black, while Averie Gunther got the victory from the circle for Wy­lie.

Keeping things rolling for the Lady Pirates, Wylie went on to beat South Garland on April 1 by a final of 25-0, their largest margin of victory on the season. Aubrie Gunther was the winning pitcher for the Lady Pirates, as she no-hit South Garland in the victory, while Wylie totalled 22 hits in the win. Aubrey Brown had the lone home run and also hit a tri­ple in the game. She collected two of Wylie’s six extra-base hits in the game.

Wylie knew heading into the new week that the game against Sachse was two teams vying for a district championship. Af­ter the Lady Mustangs won the first contest 10-1 on March 8, the Lady Pirates responded in a big way, totaling 13 hits while holding Sachse to just one in the 11-0 win on April 6.