“The multi-event drill meet gives Junior ROTC a chance to showcase their skills, develop teamwork and discipline by adhering to military drill and appearance standards,” MSgt Lisa Breuer of WEHS said. “Competing against their peers from other schools increases the focus during practice and gives an opportunity to have their skills assessed by college level ROTC cadets, active duty Texas Army National Guard members, and military recruiters.”

Competitors included 15 Air Force, two Army and one Navy unit. About half the teams traveled two hours or more to attend, with two teams coming from Oklahoma. The longest trip of 4.5 hours was made by members of the Central High School Air Force JROTC program from San Angelo.

The units could enter up to 11 different categories of competition at the Wylie East Raider Nation Invitational. 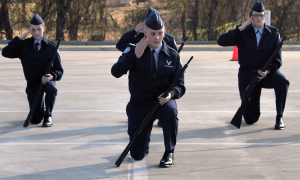