Great day to be a Raider 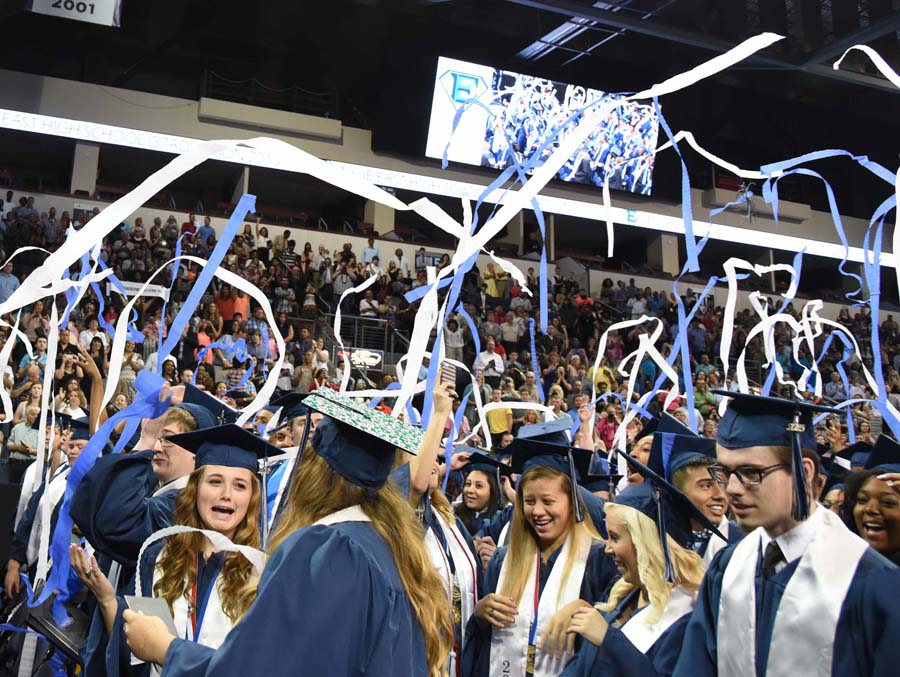 Raider students ceremoniously threw streamers of blue and white in the air at the conclusion of the Wylie East High School 2015 graduation.

The ceremony, held at the Allen Event Center June 6, celebrated the 348 graduating students. Looking toward the future and embracing the past was the theme of the graduation as the top two students, Valedictorian Peyton Demetrovich and Salutatorian Nate Porter, addressed their fellow classmates.

“Today is about celebrating the past and contemplating the future,” Peyton said. “I do not know all the achievements of the Class of 2015, but I would like to take a moment for everyone to envision their greatest and happiest moments in high school.”

There was a list of memorable events cited by Peyton, including sports competitions, awards, acceptance letters, performances, and the act of passing a difficult class, that he felt may have left a mark on his fellow classmates

“It is what you build upon this framework that Wylie East has gifted us that determines who you are and what you will become,” he said. “Refer back to your overall goal in life and update it with every new step towards it. Maybe you will notice the goal has shifted or perhaps it’s stronger than it ever has been.”

The valedictorian thanked several teachers for having a positive impact on his success at Wylie East and the students for making the school not just a place for learning, but a home.

“Someone once told me anyone could be valedictorian. Before me sit students and friends whose IQ’s and test scores blow mine out of the water, and whose colleges outrank mine,” Peyton said. “I believe the reason I am where I am today is because I had a goal and I worked my behind off for it.”

The ceremony included speeches by Principal Mike Williams, introductions of the superintendent and board trustees, recognition of graduates and the presentation of degrees. Students walked the stage, accepting their diploma from School Board President Barbara Goss before posing for a picture with the principal.

Williams told the Class of 2015 it had been an honor working with such an outstanding group.

“Todays is a special day,” he said. “These students set a goal to graduate… and today that goal is realized.”

The class sang the school alma mater, written by 2012 WE graduate Justin Waggenhauser. “An Irish Blessing” was performed by the WEHS band and choir, as has been tradition since East’s first graduation.

The salutatorian began his speech admiring the crowd and his formal graduation attire, a hand-me-down from his older sister, also a Wylie East graduate.

Nate touched on the topic of the future and perspective.

“We are done with high school and that is certainly something to celebrate. It has been a long four years,” he said. “But we have even longer- 50 to 70 years- to look forward to.”

He shared some advice about responsibility that he received in his early teen years.

“Bruce Rougeau, who was my youth leader at the time, taught me an important lesson,” Nate said. “He told me, ‘Porter, you’re not looking for a long term relationship here, you gotta just get in there and git’er done.’”

Nate said he laughed at the time, but the advice was valid. When there is something in life that needs to be done, there is no point in complaining or waiting for someone else to do it, you should just do the responsible thing and take care of it.

He emotionally shared the life perspective of his friend Jacob Tilton, who had positively influenced his perspective on making the best of life.

“He has the attitude that he gets to do the things he does, instead of he has to do those same things,” he said. “That change in perception makes a world of difference in all aspects of life and I’ve found that it can do the same in the situations I find myself in as well.”

Nate said viewing things as a privilege makes you strive for excellence and it has been his privilege to attend school with his fellow classmates.

Principal Williams concluded the ceremony saying “Apply the lessons you have learned here, be prepared and follow your plan. You’re off to great places. Today is your day. Your mountain is waiting, so get on your way.”