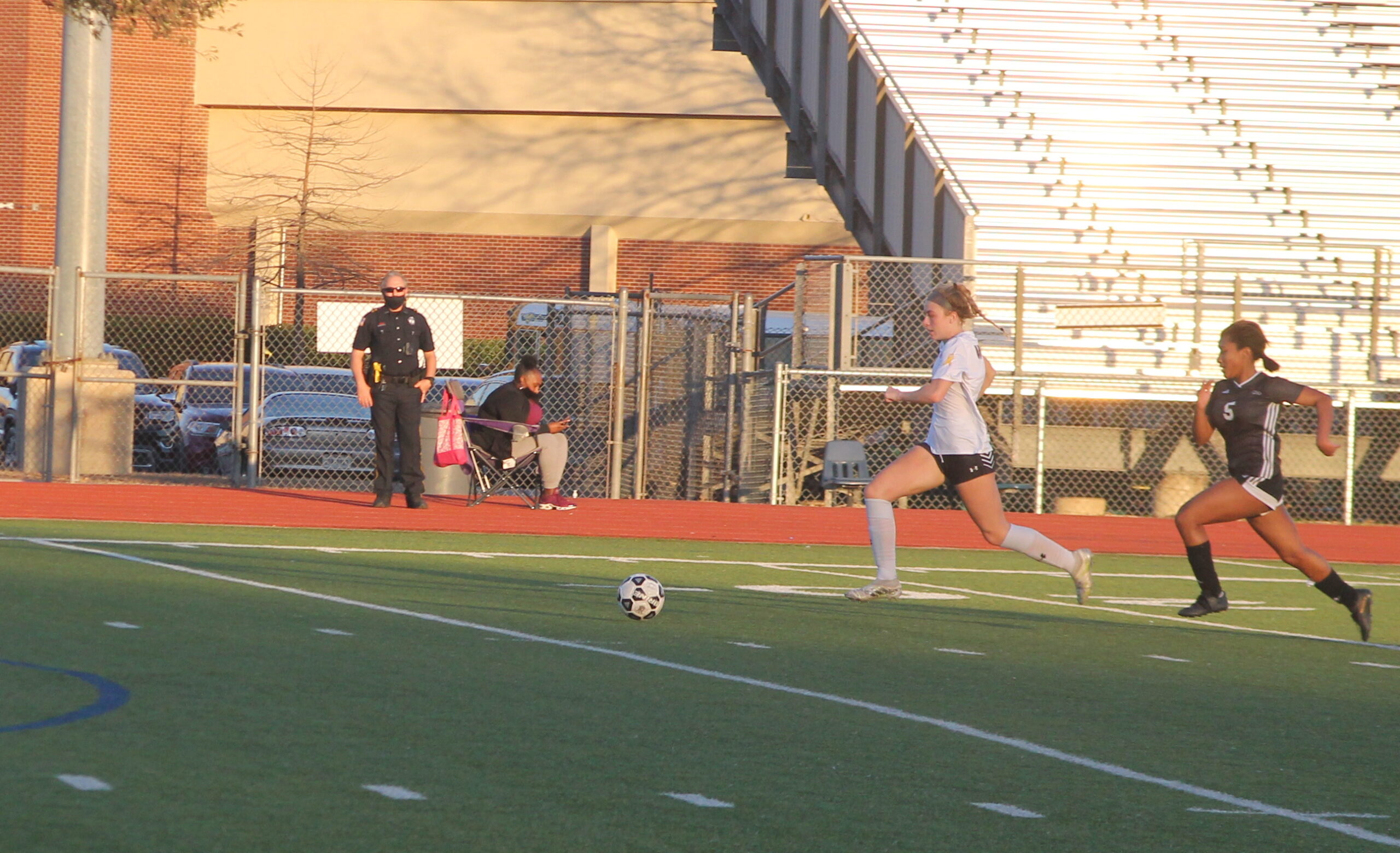 The North Garland girls soccer team needed momentum to swing in their favor.

Down early in the game to the district-leading Wylie Lady Pirates on Feb. 24, one of the few Raiders opportunities came late in the first half off of a corner kick. Looking to spark a comeback, the delivery was short and Wylie won the ball back. What happened in the next 15 seconds sealed North Garland’s fate.

Wylie’s Amelia Leggett observed this play happen from around midfield. With the number of bodies forward for the corner kick, she knew if her team can win the ball back, she could put the pressure on the two Raider defenders sitting back on the play. They had already been helpless trying to slow her down, as Leggett scored earlier in the game on a cross earlier in the box, and with a 2-0 lead, one more goal meant the game could be settled by the halftime break.

After the delivery, Leggett saw her teammate Payton Joost win the ball on the right side of the field. Sprinting diagonally toward the sideline, Leggett raced toward the spot she knows Joost will deliver the ball. As she collected the pass, she shoved off the North Garland defender and had a 30-yard sprint toward the goal. With just the Raider keeper to beat, Leggett at full speed deftly touched the ball under the arms of the goalie and the ball trickled into the back of the net. The Lady Pirates led 3-0 and went on to win the game 6-0.

Head coach Chris Bezner has built a strong program at Wylie High School since taking over in 2007. Last season, the girls soccer team had 13 seniors on the roster that graduated. Needing to rebuild the team this season, Leggett was one of the few returning players who had to integrate with a new roster.

“There definitely are challenges to learning to play with new partners up top,” Bezner said. “It was so tricky with COVID this offseason building that chemistry and finding a dynamic of who’s going to work well together. She’s got to learn their tendencies and they have to learn what Amelia likes to do – how she’ll make a diagonal run and go and get the ball – so once they played together it got a lot better.”

It had a rocky start when the Lady Pirates opened the season 6-3. By no means a bad result but the team knew they had so much to grow, and Leggett said they began to find their groove in district play.

“It’s a completely different team than it was last season,” Leggett said. “It was just about communication. We have been able to talk with one another to talk about and where we like the ball and how to complement each other on the field. We play to each other’s strengths.”

Of all the players on the roster, Leggett was one of the players most equipped to adjust to playing with new teammates. The Lady Pirates have employed a two-striker formation her entire career to date, and in her first year on the varsity team as a freshman, she played with foreign exchange student Agnes Hedman. The young duo was good enough to lead the Lady Pirates to the regional quarterfinals, and Leggett was named the District 10-6A Newcomer of the Year. Her sophomore year, she was paired with Evelyn Slaughter up top and Wylie was 10-2 in district play before COVID-19 ended the season prematurely. Leggett was named as a second-team all-district player for her efforts. After seeing her adjust to new teammates each season, Bezner said the staff was ready to see her lead the attack.

“We were really excited about her this season,” Bezner said. “Her freshman year she played with a foreign exchange student in Agnes and they built great chemistry up top. Then last year it was Evelyn who played up top with her. Now it’s really opened up the field for her and she ground as an underclassman and we were excited to see how she would blossom.”

Leggett even thought the experience with her teammates in years past had put her in a position to develop and learn more each season.

“I learned so much playing with Agnes,” Leggett said. “She looked at the game so differently and it really helped me look at the game differently. I’m constantly able to learn more from my teammates. It’s amazing, there’s no limit to what I can know and learn about the game.”

That game against North Garland was during a stretch where Wylie was forced to play four games in five days due to the winter storm postponing games. The Lady Pirates were undefeated in District 9-6A competition and looking to keep a hold of the top seed in the standings. When they needed a star the most, Leggett showed. She scored nine goals over the four games, including back-to-back hat tricks against Garland and North Garland. In total, Wylie has won 12 of 13 in district play and is one win away from claiming the District 9-6A championship. The growth of the team was in part of the talent on the team and the growth and support Leggett has seen every day.

“We’ve been pushing each other in training,” Leggett said. “We’re really supportive of each other and whenever we make a small accomplishment we are there to support each other. It’s awesome to see and be a part of.”

Leggett has led the way, as the forward has 29 goals in her junior year, 23 of which have come during the 13 district contests. The 29 goals are good enough for sixth overall in the DFW metroplex, from statistics accumulated by The Dallas Morning News. Even with all of her accolades from the season, Leggett is quick to credit her teammates for her success.

“We’ve been very fortunate to build a great team chemistry this year,” Leggett said. “We work really well together and I’ve been fortunate to be on the end of plays. I can’t take too much credit because I’ve got great teammates who work hard and give me a lot of chances.”

Playing the game since she was as young as four, Leggett’s goal against North Garland showed a lot of what coach Bezner thought was special about her skill set and separated her from the rest of the district.

“It’s really a special skill set to understand the nuances to the forward to have knowledge of your runs – how to time a run to stay onside, how to understand the direction of your run,” Bezner said. “A lot of that comes naturally for Amelia. She’s got a great knowledge of the game and has played for a long time at a high level. She knows what runs are effective and it’s the difference between what makes her effective among the forwards in the area.”

Leggett has gotten almost a degree in soccer while working with the Wylie soccer team. A dynamic athlete who stands out on the soccer field and on the track with a sub-one minute 400-meter dash, she has always viewed herself as a threat to beat her defender.

“I like to optimize my speed in the game,” Leggett said. “If I can I like to take people one-on-one and use quick runs and challenge defenders with the ball to make plays for the team.”
While Leggett views her speed as her biggest asset on the field, coach Bezner said she’s become a top talent by developing the little things. Her ability to contribute to everything in the attack has allowed the Lady Pirates to score 100 goals in 23 games, 24 more goals than the next highest team in the district.

“She does like to take people one-on-one, but she contributes much more than that,” Bezner said. “There are tons of times where she’ll check back into the middle, check to the ball, create space and attract two or three defenders and find an assist. She does a great job facilitating the attack and adjusts to the game.”

Wylie’s final game of the regular season will be tonight as they take on South Garland at 7:30 p.m. If the Lady Pirates are to clinch a district title and make a run in the postseason, coach Bezner believes she’ll need to continue to be on the end of the team’s scoring chances.

“There’s been great chemistry and there’s a really unselfish core that can play the ball anywhere we need to all on the field and she’s got a striker’s mentality to go to the goal and find the ball and finish,” Bezner said.