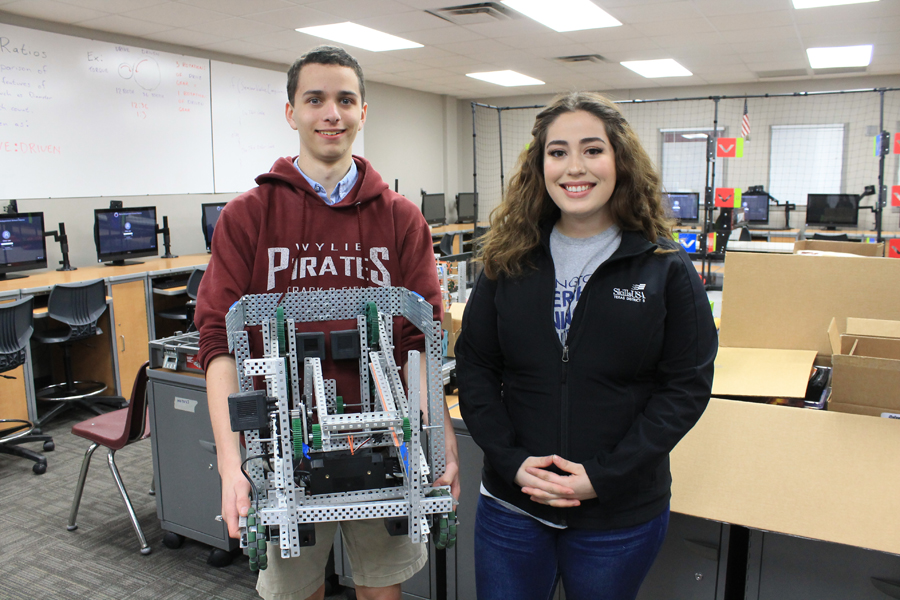 Because they placed first in a regional contest in February, Wylie High juniors Jaron Zell and Sophia Casas will head to the SkillsUSA state robotics competition in Corpus Christi Thursday, April 4.

The students were also on a four-person team that made it to state at the VEX robotics competition but didn’t advance to the world competition.

During VEX, teams are randomly paired up and go through several matches a day.

“There’s two robots on the red team and two robots on the blue team,” said WHS robotics teacher Morris Goldade. “We have nine flags, and both red and blue caps, and a platform. The object is to score as many things to your color as possible by building a robot that shoots balls, flips caps and has the capability to park on the yellow platform. The goal is to flip all the caps and flags to your color. Whichever alliance – red alliance or blue alliance – throws the most points wins that game.”

For the full story, see the April 3 issue or subscribe online.

Sometimes all it takes is a good break. For the Wylie Pirates, the breaks didn’t go their way Friday night, as they fell to South Garland 35-30. Wylie had three turnovers that cost them in this game.
View on Facebook
·Share

Wylie City Council mem­bers last week got a look at the architect’s vision of Wy­lie Fire-Rescue Station No. 4 and reviewed funding for the project that is slated to start in April 2021 and be c
View on Facebook
·Share

WORLD POLIO DAY - October 24
We've all been facing challenging times the past months. It seems every day, something hits a news feed that could be a cause for concern.
This message is a little different. It's about good news featuring a worldwide partnership with one mission. Take a moment and focus on something that affects us all, both locally and worldwide.
Rotary International (est. 1905) launched PolioPlus in 1985 and was a founding member of the Global Polio Eradication Initiative in 1988. Through decades of commitment and work by Rotary and its partners, more than 2.5 billion children have received an oral polio vaccine.
The key word in this initiative is 'eradication'. Rotary started a push to completely remove polio from the face of the earth.
Only Afghanistan and Pakistan still have active polio cases.
Saturday, October 24 is World Polio Day. It's a recognition of what has been accomplished, but it's also a call for help in the race to remove the last trace of this horrible disease.
Take time to watch this video and learn what you can do to help.
For more information on how you can help end polio go to www.rotary.org, or www.rotary5810.org.
Thank you,
Chad Engbrock
Farmersville (Texas) Rotary Club
www.youtube.com/watch?v=Rp5Cg1I4OeE&feature=youtu.be ... See MoreSee Less

Together, we see a world where people unite and take action to create lasting change – across the globe, in our communities, and in ourselves.
View on Facebook
·Share

State reports one COVID-related death for Collin County this afternoon