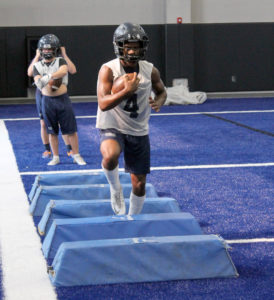 WYLIE — There’s something new behind Wylie High School’s main building, and it’s making no attempt to hide.
The large structure, which opened just recently, is the new indoor athletic facility that will provide a practice during inclement weather.
“If we’re playing Rockwall Heath on a Friday night (the teams meet Aug. 26 in the season opener), and Rockwall Heath has an indoor (facility and we don’t) … Well, if it’s awful weather on Monday, Tuesday and Wednesday, then Rockwall Heath goes into the indoor, and we have to do something different,” Wylie East head football coach Joe Lepsis said, “which is completely altering your practice plan. In years past, we’ve had to go in the gym. It’s impossible to have a good football practice in the gym. Obviously, the No. 1 thing is that you’re never going to miss out on practice time.”
(To view the entire article, check out the Aug. 24 edition of The Wylie News or visit http://www.etypeservices.com/Wylie%20NewsID245/default.aspx)