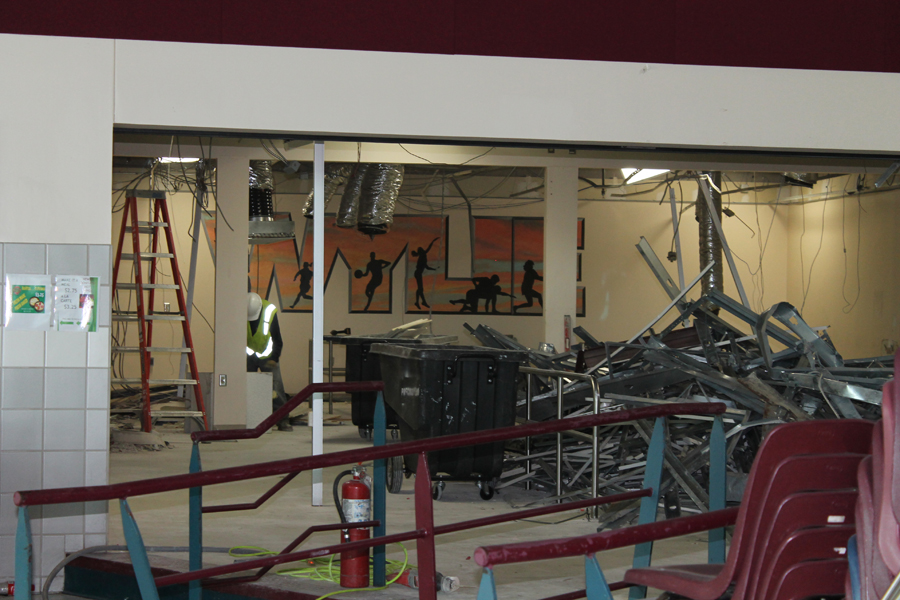 Wylie High is seeing major renovations over the summer. Pictured is the new cafeteria, where students will have four spacious lines to walk through, an updated kitchen and larger seating area.

Construction equipment, torn up land and construction workers surrounding Wylie High School has become part of the landscape the last few months. The campus will be seeing major renovations thanks to the Nov. 4, 2014 bond.

The school will receive a projected $28.231 million in upgrades and renovations over the next two years.

Beginning in May, the school saw approximately 40 projects take form.

Projects scheduled for completion in September include the addition of sidewalks and other exterior improvements, big band and orchestra instruments, flooring replacements, replacement of heater boilers, replacement of weight equipment in field house, installation of softball lights, laser level baseball outfield and HVAC.

The HVAC replacement for non-classroom areas has recently begun. The two and three story classroom sections will follow. The existing kitchen equipment has been removed and demo began June 15.

Orchestra construction has seen excavation, underground utilities and piers completed. Grade beams will be formed and poured in the coming weeks. Structural steel floor beams have been delivered and will be installed after the grade beams are complete.

Approximately 54,890 square feet of roofing has been replaced which mainly consists of the gyms, athletic areas, central plant and some fine arts. Roofing over classroom sections of the building are scheduled next.

Most of the excavation work for the new bus loop is complete, fine grading remains. Lime stabilization and concrete placement is scheduled for work in the coming weeks.

Safety concerns will be met including fencing, installation of access control, LED lighting in the parking lot and updated badge system software installed.

Renovations and additions that began in May and are scheduled for completion in September 2017 include major classroom additions and upgrades, career technology renovations, HVAC system chiller, installation of new clocks and the construction of a state of the art culinary center.

The new culinary kitchen and classrooms have already seen a lot of work. Excavation is complete and piers have been installed. Most of the underground utilities have been relocated. Grade beams were recently completed and structural floor steel, under floor mechanical, electrical and plumbing items and the slab are currently under construction.

Construction throughout the district is under the management of Gallagher Construction Services with PBK Architects in charge of architecture.