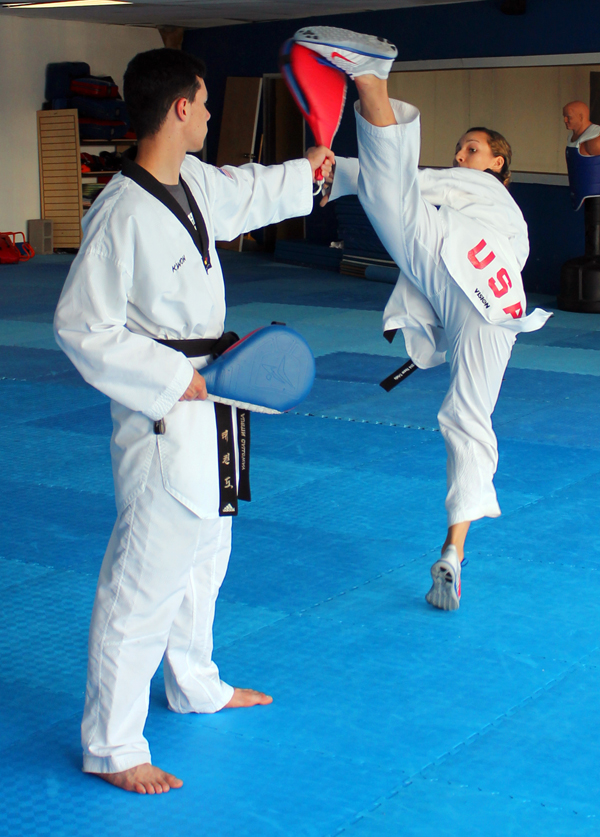 Speed and agility, which Galloway has in abundance, are two keys to success in martial arts competition. 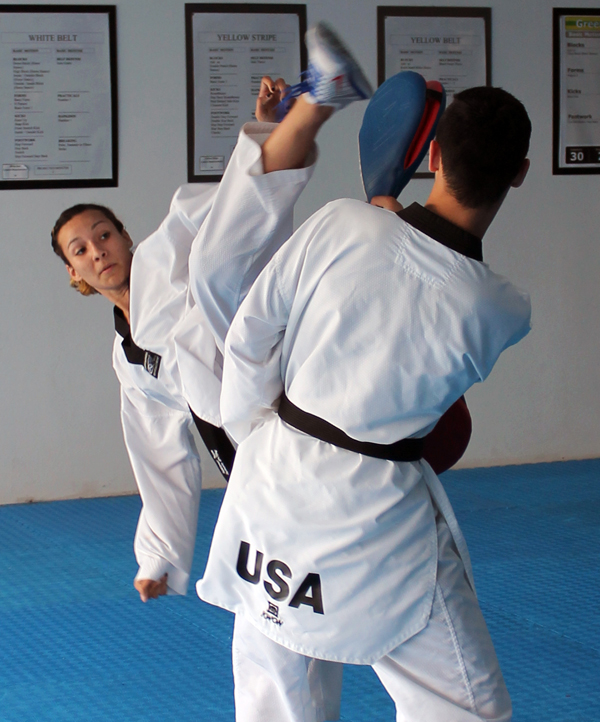 Jackie Galloway goes through a practice session with her brother Austin. The Wylie High graduate is currently among the top-ranked middleweights in taekwondo and is looking to secure a spot on the 2016 US Olympic team.

Galloway gearing up to make run for spot at the Olympics

Jackie Galloway is not someone with whom you want to tangle.

At, 19, the Wylie High graduate and current SMU student, is a first-level black belt in the martial art of taekwondo.

However, Galloway’s not looking for a fight, at least on the street. Rather, she reserves her kicks and some punches for competition, both nationally and internationally, and she’s proven quite adept at making them connect.

Currently, Galloway is ranked No. 2 in the world with the middleweight division, and No. 6 in the middleweight to heavyweight consolidated rankings. The latter is more important, in that if Galloway can battle her way into the top-six and stay there, she’ll earn an automatic berth to the 2016 Olympic games in Rio de Janeiro, Brazil.

“It’s been my goal since I was a little kid starting taekwondo to be on the big stage representing the US. It is everything that I am working towards,” Galloway said.

Her “work” began at age 7, when Galloway decided to follow in her family’s footsteps.
“My whole family is in taekwondo, and when I was seven they asked me if I was interested in joining, and that if I was I needed to stick with it and work hard at it,” she said.

That she has, and in the coming weeks, Galloway will be heading to the Australian Open (begins June 22), which will be followed by three July tournaments: the University Games in Korea, the Pan-American Games in Toronto, Canada and then the Korean Open. Galloway’s father, Gary, will coach her and the other US competitors at the Pan-Am games.

How she does at these tournaments — Galloway is the defending middleweight champ in the University Games — will have great bearing on whether she can earn a top-six ranking in the middleweight-heavyweight ranks.

Based on her most recent competition, a bronze medal at the World Championships in Russia, the odds are good that she could move up.

“This was actually the first year anyone from the US got a medal in six years,” Galloway said.

Other USA competitors also earned medals while going up against the best the world had to offer.

“It definitely fueled my fire, because I’m watching the other competitors, and seeing that I can handle them and come out victorious,” Galloway said of the competition. “Every one was a high-level athlete, but that just made me more excited and fueled me.”

Competitors will battle for three rounds, during which they will score points, with the number awarded depending on the kick used and where it lands. The competitor with the most points after three rounds wins, Galloway noted, although if one is ahead by 12 points or more after two rounds, then he or she is declared the victor.

She has competed for the United States the last two years.

Currently, Galloway practices two hours a day, which she also did these last several months while completing her freshman year at SMU, where she also was on the Mustangs’ rowing team.

“Everything is very regimented, and I have my schedule to make sure I keep everything organized,” Galloway said.

The organization will play a huge role in her upcoming tournaments, where Galloway said she’ll need to pace herself between each event. Usually, she noted, there are about 3-54 fights per tournament, and Galloway plans to focus on each fight and not look too far ahead.

As for her future in taekwondo, Galloway doesn’t see herself quitting anytime soon.

“I hope this is always part of my life,” she said.