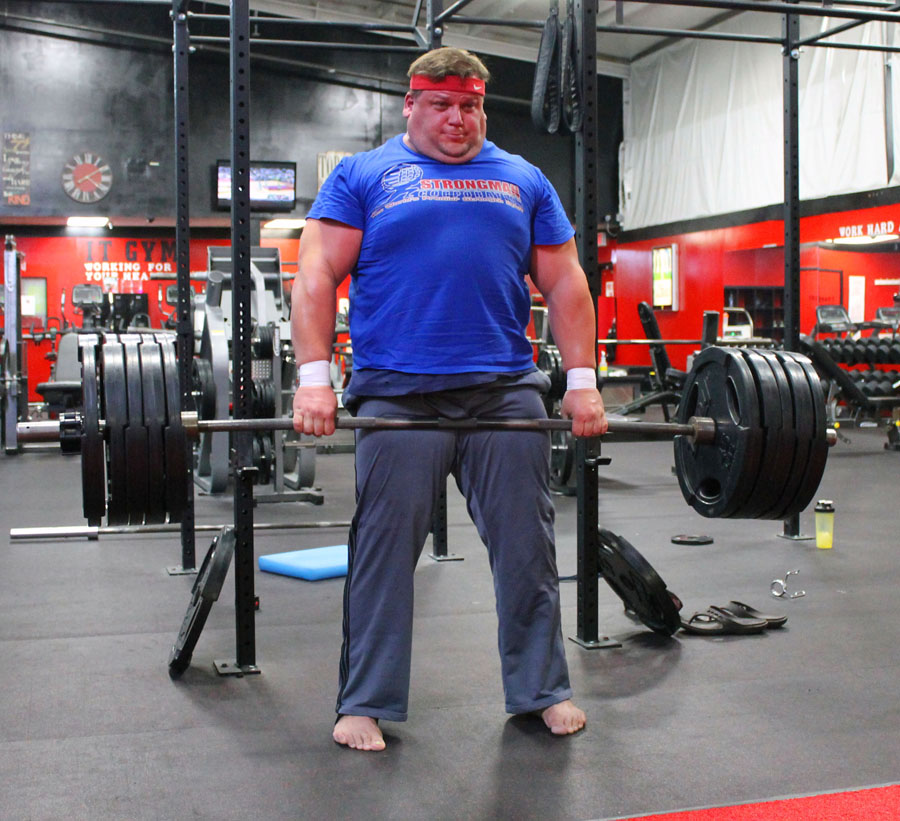 Sachse resident Lucain Herrick works on his deadlift, which will be an event during this weekend’s “strongman” competition in San Jose, Calif. A win there will earn Herrick his professional card in the sport. 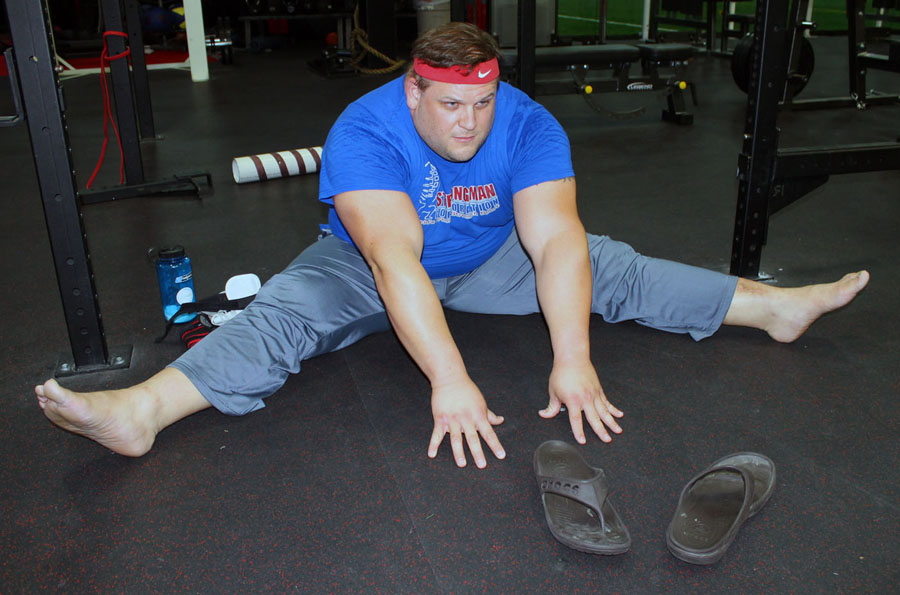 Herrick stretches out before beginning a workout at the American Indoor Soccer facility in Carrollton.

A few years ago Lucain Herrick decided that he was “fat and soft,” and so he took his 6-foot-2, 320-pound frame back to the gym.
However, after about a year of lifting, the 37-year-old Sachse resident found that he had “reached certain plateaus where I wanted to challenge myself and push myself to do something different.”
That “something different” turned out to be strongman competitions; events where burly, powerful individuals perform mighty feats that are far beyond the capabilities of most mortals.
These deeds involve large, heavy items that go by the names of kegs, sandbags, farmers’ blocks, Atlas stones log presses and others. Also, sometimes a deadlift — lifting weights while standing straight up — is one of the competitions.
“Sometimes they will do a medley,” Herrick noted. “You run with a keg, and maybe you have to go back and get another keg and load it. It just depends on what the promoter wants to do.”
Herrick competes at the amateur level, where, typically, depending on competition, there are about five events. Winning a competition as an amateur earns a spot at nationals, something Herrick did a few years back after capturing first in the strongman event in San Antonio.
He finished 18th at the nationals recently, and also got the chance to attend the Arnold Schwarzenegger Classic this past March in Ohio, which features various sports, including body building.
Making nationals is quite a step up from Herrick’s first competition, which took place about two years ago in Carrollton.
“It was very nerve-wracking. I didn’t know what to do,” Herrick said. “I didn’t even practice for it. I did horribly in it, and I think I almost got last. So, I met some people there, and I started training with them, and I met some more people and I found out where to get better.”
That eventually led him to his current coach David Hamilton, who trains Herrick at the American Indoor Soccer facility in Carrollton.
“He’s progressed a lot. He had that natural ability, the strength, but he’s gotten a lot more polished,” Hamilton said. “We’re going to tailor our training more towards (a particular competition), and especially about four weeks out, we’ll get a little more specific about what we are going to do.”
Herrick added, “I do a lot of core building, and a lot of shoulder pressing. My workout depends on whether I’m getting ready for a competition. Right now, I’m mixing in the implements in the competition into my workouts.”
Those sessions have helped turn Herrick into a 370-pound competitor (15 percent body fat), one, who, when not competing, works as flooring contractor. Also, the former Naaman Forest and Stephen F. Austin football player has to plan his meals, adding that his wife Ginger handles a lot of the peripheral details surrounding his competitions. Initially, he said, she was a little standoffish about him competing, but has come to embrace it.
Herrick’s next goal is to earn his pro card, which will allow him to compete in more events, including international ones in such locales as Canada, Brazil, Germany and Poland. That could happen as early as this Saturday, when Herrick is scheduled to compete in a tournament in San Jose.
“There are only three or four (events) a year where you can earn your pro card,” Herrick noted.
Herrick has trained extensively for the event, and whether he wins or not, that effort to get better will continue.

“I like to say pain tolerance is huge,” Herrick said. “A lot of times when you’re hurting and you’re holding something, you want to let it go, but you keep on holding, because that extra second could mean the difference in beating that guy next to you or not.”