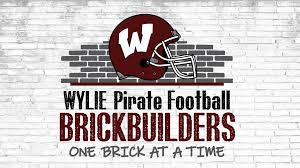 For new Pirates’ head coach Jimmy Carter, it was not the start he was looking for.

It was a difficult contest without starting quarterback Marcus McElroy and ultimately losing their star proved too much to overcome as Wylie lost 28-0 against Plano West. Wylie’s offense struggled from the outset and didn’t reach the Wolves’ side of the field until the fourth quarter. Carter said the offense had to change a lot without McElroy.

“Cam Pruitt did a good job of doing what we asked him to do,” Carter said. “He’s more of a threat as a wide receiver, but the team fought hard and didn’t quit.”

Carter also added he believes McElroy would be back for the next game.

In the end, Wylie finished the game with 153 yards of offense, and only 20 through the air. Plano West took advantage of the field position advantage to be aggressive and scored early in the second quarter on a 50-yard pass in a third and long situation. They scored twice in the second and twice in the third to put the game away.

Wylie will get a chance to right the ship next week with a home game against Lewisville on Oct. 2.

For the complete story, stats standings and a preview of the Pirates’ next game get this week’s edition of The Wylie News.