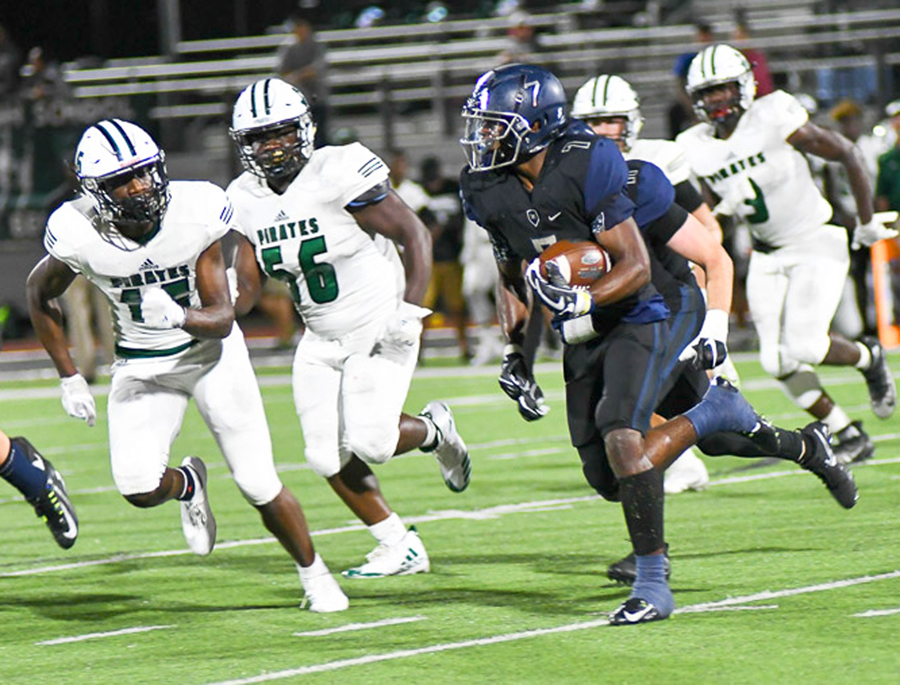 Corbin Johnson has rushed for 13 touchdowns and more than 1,000 yards this season.

WYLIE — The Raiders return to the gridiron 7:30 p.m. Friday at Royse City, a contest in which Wylie East looks to turn around its district fortunes; they currently stand 0-2 in 15-5A after losses to North Forney (70-65) and Mesquite Poteet (44-14).

The entire district had a bye this past weekend and will resume action this Friday. Other 15-5A games are West Mesquite at Highland Park, North Forney at Mesquite Poteet and Forney at Lovejoy.

Friday’s contest against the Bulldogs (0-2 in district as well) will be the first of five remaining 15-5A contests, with East likely having to win four to have a shot at the postseason. After Royse City, the Raiders will host Lovejoy during homecoming on Oct. 20, followed by an Oct. 27 contest at West Mesquite, a Nov. 3 home game with Forney for Senior Night and then the Oct. 10 regular-season finale at defending Class 5A state champion Highland Park.

A year ago, the Raiders handed the Scots their last defeat of 2016, also in the regular-season finale, before HP went on a playoff run that concluded with a state championship win over Temple.

(To view the entire story, check out the Oct. 11 edition or subscribe online)

Wylie volleyball prepares to make history against No. 1 Klein

Being the first to accomplish something is never an easy task.  As Wylie continues their Cinderella season, they’ve faced doubts from the outside along the way. A team that has never made a regio
View on Facebook
·Share

You could be a winner! The Wylie Downtown Merchants Association is giving away three $500 in gift certificates to be awarded December 17. Visit participating merchants to fill out an entry form by December 16. DiscoverWylie.com ... See MoreSee Less

Wylie Police Department is doing its part again this year to stave off the grinches who want to steal Christmas joy. Residents who receive packages at their homes instead may have them sent dire
View on Facebook
·Share