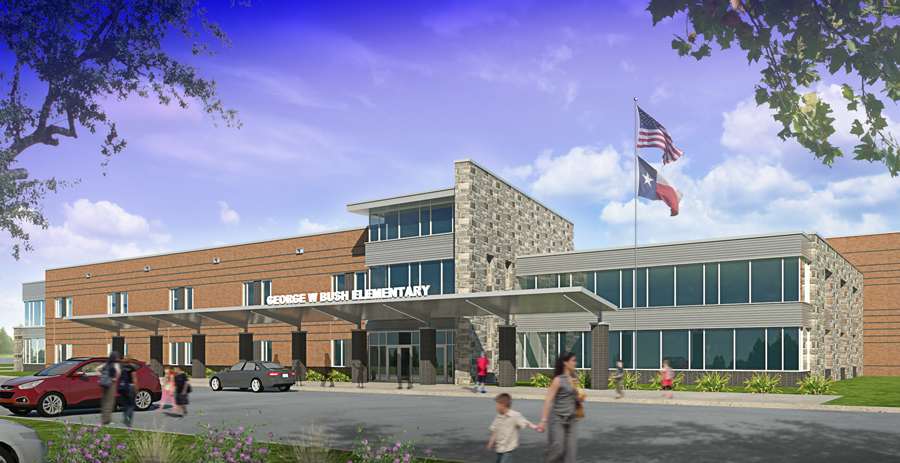 Plans for Bush Elementary are under way and school officials have been meeting with architects from PBK to discuss design, layout and much more. The new school will be located in the Inspiration subdivision north of Wylie on Parker Road.

The school will have two stories, and although it may physically look smaller, it will be approximately the same size in usable square footage as existing elementary schools throughout the district. The building will have the capacity to hold 900 students.

The cafeteria and gymnasium will have a dividing wall that can be opened up to accommodate for large crowds during events and assemblies.

“The nice thing about this is you open up the cafeteria from a 6,000 square foot cafeteria to 10,000,” said PBK architect Ken Kessler. “The cost for square footage is more usable than other buildings we have built.”

The school is divided into two sections with academics on one side and the remainder of the school on the other, separated by partitions that can be locked, allowing for more functional use in off hours.

The school will be equipped with state of the art technology and a Dual Language Academy wing.

The exterior of the school will be brick and stone, with the stone featured on accent walls throughout the school. School board trustees chose a more neutral toned color scheme.

Vinson said that when choosing colors you have to think long term. The district is currently taking the bright colors out of Dodd Elementary and putting in maroon and taupe colors, making it look more similar to Bush.

“We would like to add accent colors with the furniture and pictures,” School Board Trustee Stacy Gooch said. “We understand it isn’t like your typical elementary school with the bright colors, but we keep changing the bright colors. These will stand the test of time.”

“It is the best building, from a preliminary appearance standpoint, the nicest looking building and most functional that I have ever built,” said Superintendent David Vinson. “And I have built a lot of buildings, with a lot of different architects.”