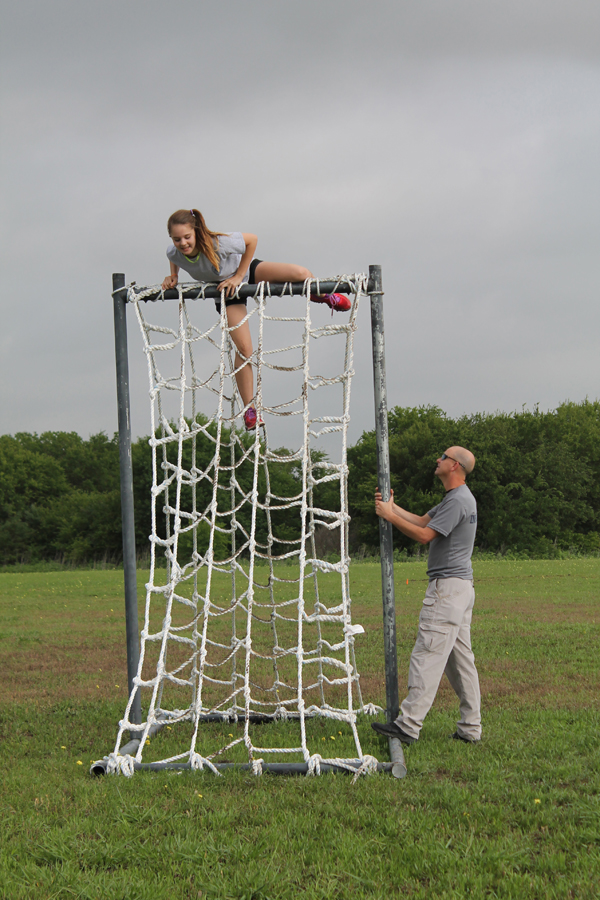 This cargo net ladder proved to be an easy obstacle for a Wylie Junior Police Academy cadet, Taylor Teamann, as she goes over the top. Ready to provide tips and assistance is Officer Shane Varner.

The first of two academy sessions started Monday and continues through the week at McMillian Junior High School. A second session is slated for the week of July 27-31.

“It’s geared to building confidence, to let them know they can accomplish a goal,” School Resource Officer Michael Stewart said.

This is the third summer that Stewart has headed the academy which started in 2011. Instruction is provided by the six police department SROs along with specialists such as Special Weapons and Tactics officers, detectives, patrol officers and K-9 handlers.

Stewart reported that the junior academies attract students from all social circles, many of whom find common interests and develop lasting friendships. He noted that the academy has not been run enough years to see any participants go on to purse law enforcement as a career.

However, the SRO pointed out, several junior academy graduates join the police club in high school, participate in club community work and return to help at the summer junior event.

The junior police academy is open to students who are going into the eighth and ninth grades. The first year the police department conducted one summer session, but that has now grown to a pair of sessions with a total of 55 students.

“It’s growing. This is our second year of having to conduct two camps,” Stewart said.

The camp, which runs from 8 a.m. to 5 p.m. each day, is designed to test participants as well as teach them, beginning each day with a 1-hour calisthenics session along with an obstacle course. The course includes hurdle jumps, rope climb, tunnel crawl, tire drag, log carry and wall climb. Students also will complete runs of one to two miles.

“The kids are tired and we are tired,” the SRO declares.

To get a better understanding of impaired driving, students are slated to drive a golf cart while wearing Fatal Vision Goggles which simulate impaired vision.

Stewart reported that participants generally like the scenario based training the best, gathering evidence, interviewing role-playing suspects, or conducting negotiations.

Also this summer, WPD is conducting a youth enrichment program for at-risk youth. The program is set for July 13-24 at Smith Public Library.