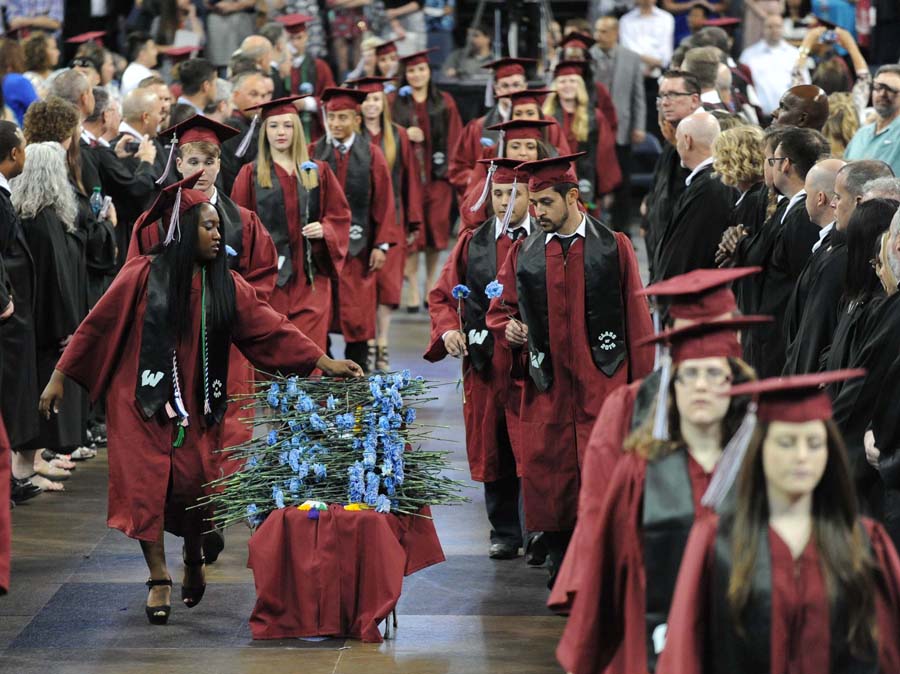 Members of the WHS Class of 2015 leave a blue rose on a chair in memory of fallen classmate Andie Studley.

The Wylie High School Class of 2015 entered the Allen Event Center to the traditional Pomp and Circumstance march holding blue carnations in their hand. Walking to their seats, each student placed a flower on a table in honor of Andrea Jean Studley. Soon the table was blanketed with 442 flowers, honoring a classmate and friend to many, who passed away in 2013.

Principal Virdie Montgomery welcomed all, including the superintendent, school board trustees, faculty and administration.

The Wylie High School band and choir performed “The Battle Hymn of the Republic” prior to the introduction of the top two students in the Class of 2015, Valedictorian Callahan Claire Martin and Salutatorian Najib H. Gazi.

“Take a quick moment to think of your biggest dream when you were in third grade,” Callahan said. “For me, my primary goal was to be my high school’s valedictorian.”

She recalled watching her brother recite his valedictory speech when she was in elementary school and expressed her determination to accomplish the same. Callahan said it wasn’t always an easy ride. Her friends, family and teachers helped her reach her dreams and broaden her mind.

The valedictorian recalled the ups and downs of high school, the success of the football team, Wylie High School’s feature on Letterman for their saying “AHMO,” and the sadness over the loss of her friend, Andrea Studley.

“She left us with many inspiring memories,” she said. “She was a wonderful role model, and it is with great joy we honor her today.”

The valedictorian said the Class of 2015 leaves Wylie High as family, wishing them happiness as they each take their separate paths.

Najib, the salutatorian, had a tough act to follow considering his brother, Asim, was the 2014 valedictorian. He began his speech with mention of various moments that he and his classmates would remember, including Tom Dreesen, comedian and founder of the term “AHMO,” performing at the high school and the success of the football team. Attempting to one up his brother’s 2014 class picture selfie, Najib invited Montgomery to join him at the podium for a selfie of Montgomery taking a selfie of the Class of 2015.

The salutatorian said his time at Wylie High had been filled with joyful experiences thanks to his friendships, family and the faculty. He thanked each person who had helped him find joy and success at Wylie High.

“God has blessed me with the knowledge to recognize the important people and ideas in my life,” he said. “Class of 2015, our time has come. Let us have no regrets. Embrace these moments. Remember your past but always continue to push towards the future.”

The salutatorian literally “wrapped up his speech” with a rap song he wrote just for his classmates.

The graduating students walked the stage, taking their diploma from School Board President Barbara Goss and shaking the hands of trustees and the superintendent before posing for a picture with Montgomery. Prior to the ceremony, a special diploma was awarded to the family of Andrea Studley.

Students listened to their school alma mater, performed by the WHS band and choir. Student Body President Lea Maric gave a staff tribute, thanking the entire staff and faculty at Wylie High for the countless hours they had spent making Wylie High the place it is and for impacting the success of every student. Senior Class president Alexandra Nicole Knight introduced the superintendent.

“I met this group three years ago,” Montgomery said at the close of the ceremony. “They reflect some of the most outstanding people I know.”