In-Sync adds to its exotic family 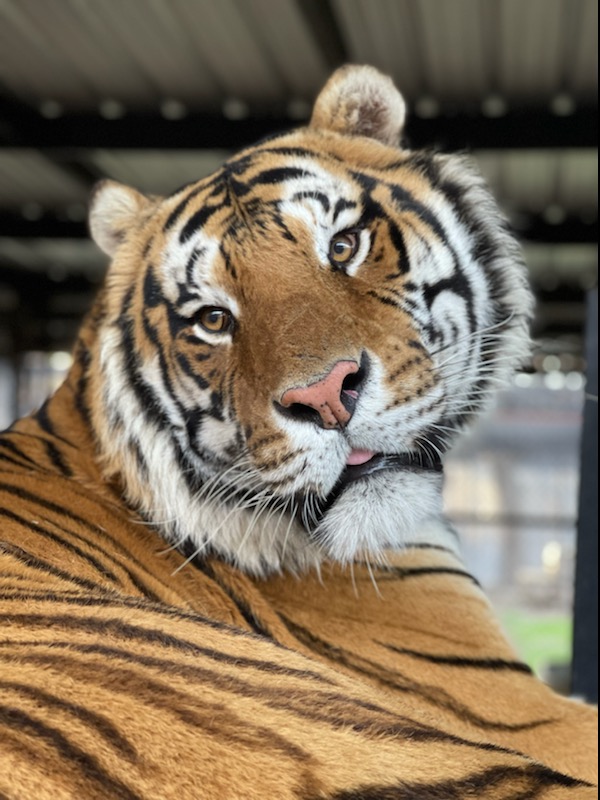 In-Sync Exotics founder Vicky Keahey has participated in a lion’s share of exotic animal rescues for almost 22 years, and the most recent one is no different.

The Wylie nonprofit now has even more mouths to feed — big mouths — that belong to nine tigers, seven female and two males, that were welcomed to the facility two weeks ago.

The nine tigers were voluntarily donated by Doug Terranova of Kaufman, owner of Terranova Enterprises, Inc., to the In-Sync facility located at 3430 Skyview Drive in Wylie.

The tigers surrendered by Terranova are typical of some of In-Sync’s past rescues — they were used in the entertainment industry including TV and film appearances, photo shoots, and circus performances.

In 2019, the USDA permanently revoked Terranova’s tiger handling license and fined him for multiple violations of the Animal Welfare Act.

The staff believe that all of the tigers are in good health, said Keahey, “but they will undergo checkups from In-Sync’s veterinarian Dr. Cameron Ratliff and team.”

Finding space for the new cats didn’t present a problem thanks to some advance planning on behalf of In-Sync. Recently, the nonprofit completed its new 10,000 square foot bobcat enclosure, says Keahey, “which allowed us to move animals around, freeing up other enclosures and playgrounds.”

In addition, because all the cats came from the same owner, many of them lived together, she said, “so we only need three areas to house all of them.”

While this isn’t the largest rescue in the nonprofit’s history, it is going to take a big bite out of the food and vet bill budget.

“We budget for a few new cats each year, and the reality of rescuing at risk animals is that we also have a few cats cross the rainbow bridge each year,” Keahey said. “However, being requested to take nine cats all at once does not happen on a regular basis, and with winter being our leanest months for donations already, this is more of a stretch than we expected.”

In addition to the increased food budget, the new arrivals will all need to be spayed or neutered, she said, which will cost around $20,000.

Before proceeding, Keahey says they will wait until all the new adoptees are comfortable and “we get to know their mannerisms.”  The males can be neutered in their enclosure on the same day, but the females require a “full open surgery.”

“It will probably be 3 to 4 weeks before we start with the males,” she said. “We will require the assistance of a second vet to work with Dr. Cameron.”

Keahey said they will put a manned 24-hour watch following the procedure to make sure there are no complications and “they don’t mess with their sutures, etc.”

“We will watch each cat for a week before scheduling the next cat,” she added.

The sanctuary’s funding is solely dependent on the generosity of its donors — private donations, corporate sponsors and grants, said Keahey, and every donation “no matter how small or how large, goes directly to care for the cats.”

“It’s not about money,” she said. “It’s about providing a loving, caring, compassionate forever home for these creatures that did not choose to be born and bred into captivity, much less be used for entertainment purposes.”