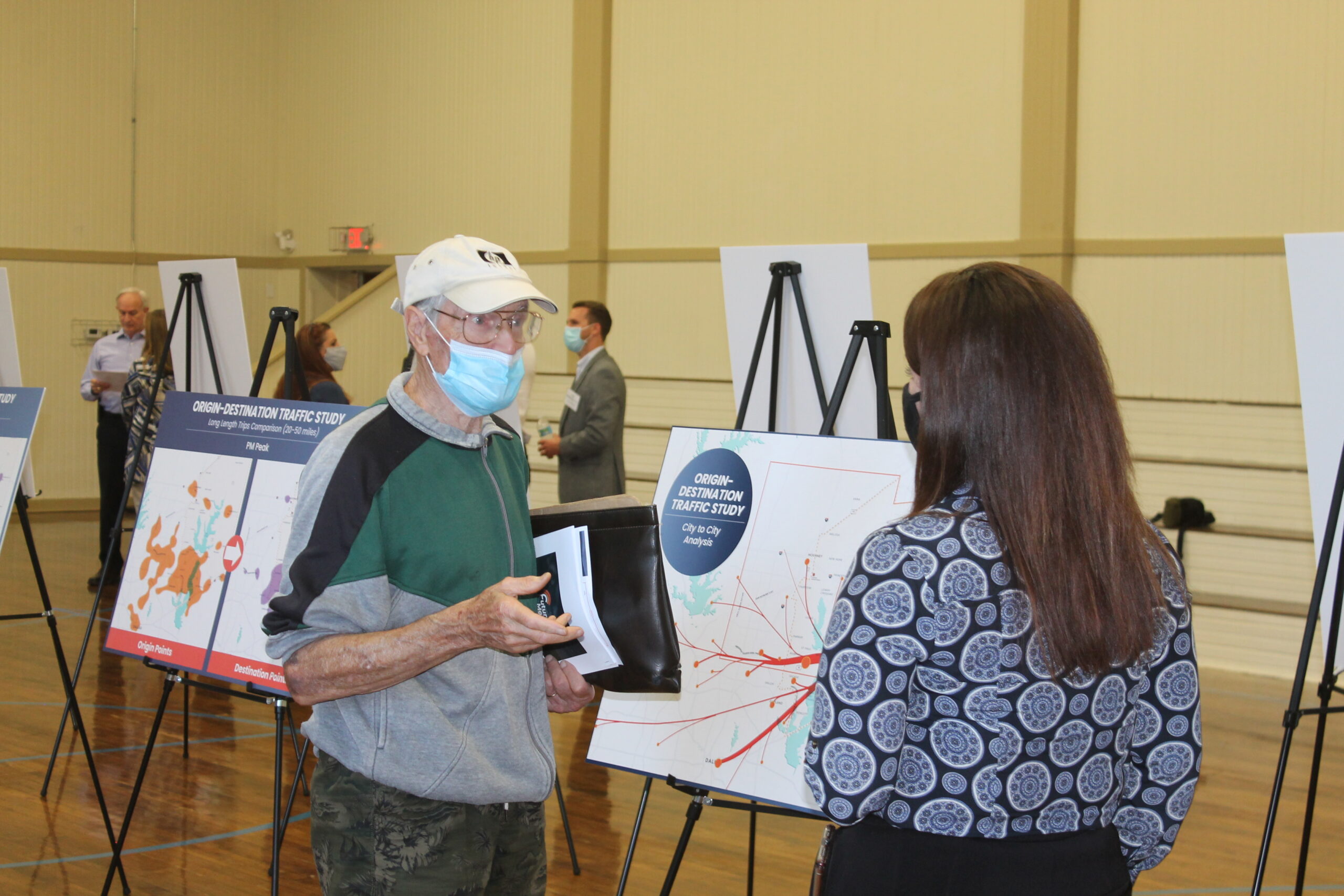 Roland Krier is concerned about traffic, specifically 18-wheelers, coming from the area behind the Walmart in Wylie, where a railway distribution park sits.

“My wife has become terrified to drive her new car because they are all over the place, night and day,” said Krier, who lives in Nevada. “And we seem to have an extreme increase of traffic because of it. When you have an 18-wheeler and a four-wheeler together, that doesn’t blend too good.”

He attended the Future Mobility Study meeting May 6 at the Lavon City Hall Community Gym to find out about the future of roads and traffic. At the meeting, residents wanting to learn more about traffic and road developments were able to provide their input for the Future Mobility Study, which is being led by Collin County. The study, according to the project website, is partnering with cities and adjacent counties to “help ensure a comprehensive approach to transportation planning within the region.” Information on the study also was provided in a virtual meeting and in a live virtual presentation last week.

“We’ve seen good participation in each of those, so it’s nice to be able offer all of those options,” said Tiffany Moss, senior strategic communications consultant at Burns & McDonnell, an engineering, architecture and construction firm that has been engaged by Collin County to assist with preliminary data collection and analysis as well as public and stakeholder outreach for the Future Mobility Study.

At the in-person meeting, few people were in attendance during the early evening hours; the event lasted four hours. Several officials, including Clarence Daugherty, director of engineering for the county, attended the meeting and answered questions. Other officials with Burns & McDonnell were at the meeting. Posters attached to easels displayed information about the project and were spread around the gym floor.

“I think people just generally just have questions about the development,” Moss said. “They seem to be spending a lot of time (with maps). So they are looking what we have that’s (planned) on the maps. But they’re also giving us some really good information about things that we may not have mapped yet or may not be aware of, or that they may know of that’s coming up, so there is a lot of discussion and questions around development.”

She said there also has been discussion on the Origin-Destination Traffic Study, which is an attempt to determine people’s travel patterns, and environmental challenges, such as effects on nearby lakes.

Daugherty said he had fielded several questions about Troy Road, which is located near Lake Ray Hubbard and is near the Rockwall-Collin County line. Many people expect to see certain projects done, but the study is not focused on that, Daugherty said.

“Most people do not want that road improved,” he said about Troy Road.

He said he knows the road has been an issue over the years, such as its condition. He will be go back and look at data regarding Troy Road, including how many lanes of traffic it requires.

“We’ll look at it and draw the right conclusion,” he said, adding that if it needs more than two lanes, then that road will stay in the planning mode.

What officials wanted to do on May 6 was provide information about what the growth was going to be and what’s going to happen if there are not enough transportation improvements, Daugherty said.

“We’re going to be in a world of hurt if we don’t match the growth with some improvements,” Daugherty said.

For more information or to comment about the project, go to ccfuturemobilty.com. The survey will be open until June 4.

Daugherty explained what would happen after the comment period.

“We’ll probably go into another phase where we’ll take the input and we’ll take the work we’ve already done and information on knowing where the congestion is and start trying to figure out where improvements need to be or at least need to be planned in order to make some steps towards either relieving today’s congestion or hopefully making some plans to preventing future congestion,” Daugherty said.

Abra Nusser, senior project manager with Kimley-Horn, which has worked on the comprehensive plan for the city of Lavon and the city’s parks and recreation master plan, attended the meeting and said she hopes people learn about the project and the magnitude of growth coming to Collin County and the need for additional mobility.

“The traffic that people are experiencing is just going to compound and the time is now to figure out what the solutions look like and what the options are,” she said.

She said if planners don’t figure what needs are now, such as alignments, public transit and connections to large highways, then the traffic is going to get worse. People need to understand how population growth affects the region.

“Communicating expectations on just what we see on trends alone is going to help people plan their futures and understand what their home is going to look like in 10, 20, 30 years,” Nusser said.

“We need mobility solutions that respect our existing character and neighborhoods, especially along SH78, and that set us up for success for years to come,” she said in an email.

The city is updating its comprehensive plan and master thoroughfare plan to incorporate best practices and economic development, Sanson said, and working with partners like Collin County is a key part of that process.

With thousands of new homes anticipated within Lavon’s ultimate municipal boundary within the next 10 years, city officials are working hard to communicate and collaborate with developers to influence development to be consistent with the community’s vision and feedback as much as possible, Sanson said.

“If Lavon makes the right strategic investments now and is supported by residents and stakeholders throughout the coming years, new development will be higher quality and more beneficial to the residents in the near and distant future,” she said.

In addition, she said, Lavon residents want a stake in planning, and roadways and mobility are really important to the city’s future and “the last thing we want is for these things to get designed and placed without our input.”