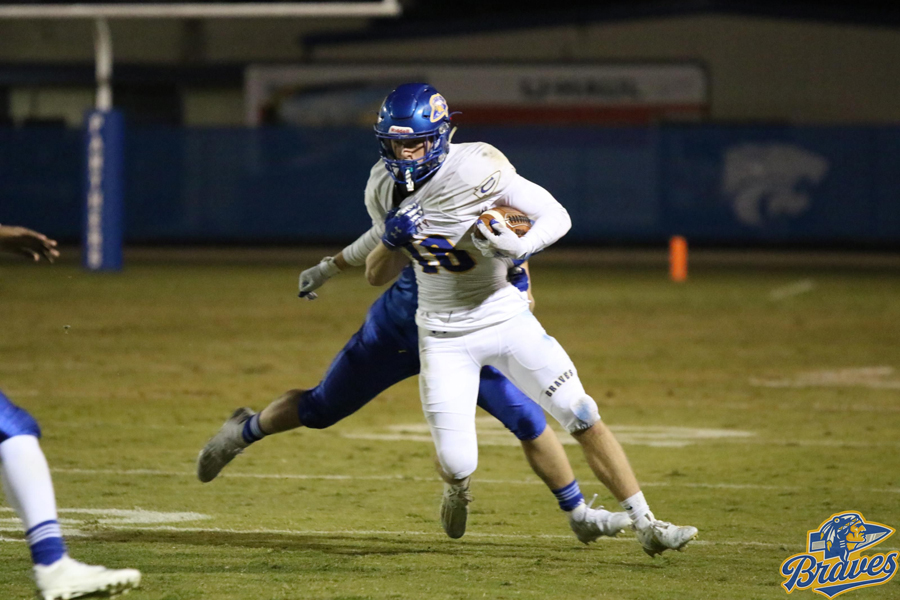 Playing on a quick turnaround after their win over Farmersville, the Community football team was unable to continue their success in their next contest, losing to the Quinlan Ford Panthers 40-13 on the road Monday, Nov. 2.

“We just need to get back to fundamentals and clean everything up,” Blann said. “When you’re playing a physical, clock chewing team like Quinlan Ford, you can’t afford to turn the ball over multiple times. That really hurt us, but hats off to them. We just need to make corrections and move forward. We have a big game Saturday against Wills Point that can clinch a playoff spot. That needs to be our focus now.”

Midway through the second quarter, the Braves had the ball at the Ford 21-yard line trailing 20-7. After fumbling the ball twice already, a touchdown on this possession would give Community the momentum heading into halftime. Instead, Paul Testa’s next pass was intercepted by a Panther defender, who returned it 75 yards to the Community 20, allowing Ford to score a touchdown right before the half.

Senior Tye Simpkins had an excellent game for Community against Ford, leading both teams in receptions and receiving yards with three catches for 90 yards, including a 42 yard reception on the first play of the game. Simpkins also made a difference in the rushing attack, finishing with two carries for 14 yards and a touchdown.

Football has often been referred to as a game of inches, where every little yard gained or point scored can be the difference between winning and losing. The same is true for mistakes, which can end scoring opportunities and kill any momentum a team has. This was definitely the case for Community against Ford, in which the Braves committed four turnovers, including three in the first half alone. These turnovers changed the outcome of the game.

Community football closes the regular season Saturday, Nov. 7, as they host the 1-7 Wills Point Tigers from Braves Field. Kickoff is scheduled for 7 p.m.