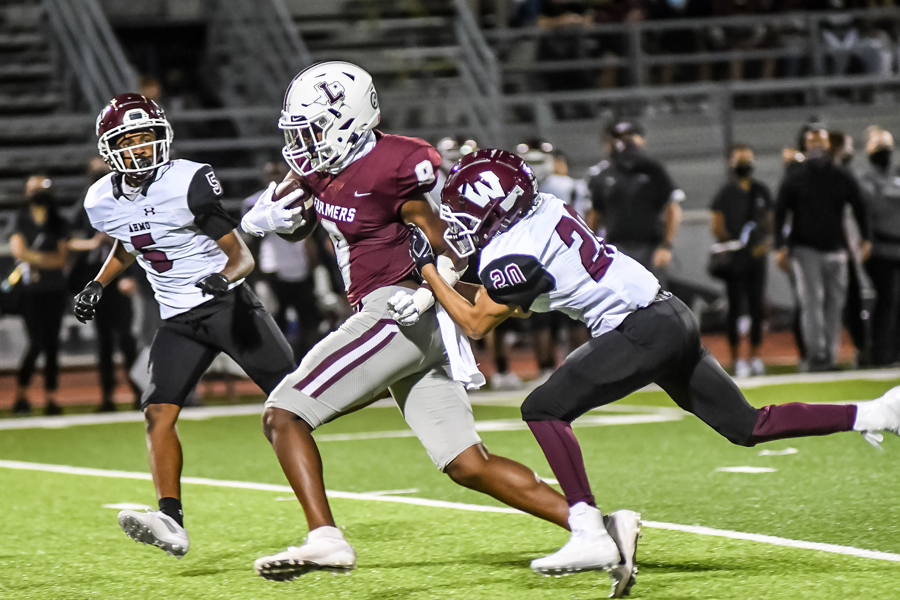 Falling down three scores early, the deficit seemed insurmountable for the Pirates.

The Farmers of Lewisville got off to a fast start against Wylie, quickly going up three scores in the first half. After a blocked extra point returned for a two-point conversion by Canyon Hall, Wylie went into the half down 20-2. Hall’s conversion was the first points scored for the Pirates all season, who went six quarters without a touchdown to open the year. Starting quarterback Marcus McElroy was again out for the game.

Things began to open up for backup quarterback Zane Montgomery and the Wylie offense in the third quarter. The Pirates on two instances cut the Lewisville lead to 12 points, the first on an 11-yard touchdown pass to Blake Fuller to cut the lead to 20-8. The touchdown was set up by a 53-yard run by Darrick McClendon and a Lewisville facemask on third down which set up first and goal.

But Lewisville responded immediately, as Wylie attempted to get them off guard with an onside kick attempt that the Farmers recovered and returned for a touchdown. The Pirates again cut the lead to 12 on a short touchdown run from McClendon, but Lewisville controlled the game from there on out. They had 309 passing yards through the air, and five touchdowns for running back Damien Martinez, four of which came in the red zone. They coasted in the fourth to a 48-15 victory.

Wylie will look to recover as they take on Camar Wheaton and Lakeview Centennial on the road Friday, Oct. 9.