Fireworks are illegal in city 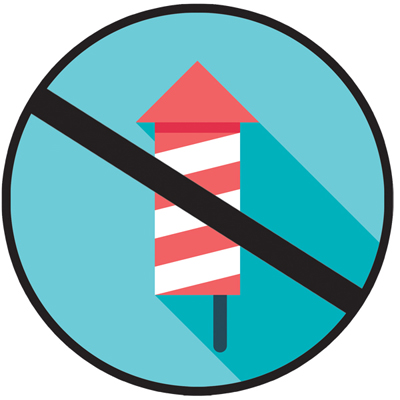 Wylie residents celebrating the Fourth of July this weekend are reminded that it is illegal to discharge fireworks inside city limits.

Although it is illegal to discharge fireworks in the city of Wylie, fire and police officers will spend the Fourth of July and the days leading up to the holiday chasing fireworks complaints.

“Obviously, it’s a problem,” Blythe said. “It starts right after dark, about 9:30 p.m., and continues until midnight.”

To handle the calls, the police and fire department bring in extra personnel, the fire chief reported.

Area residents are encouraged to attend a professionally administered fireworks display at a nearby city. All legal displays have fire, police and medical responders at the event to ensure a safe and pleasurable evening of entertainment.

“We ask people to please don’t do it,” Blythe said. “Leave it to the professionals and go watch a show.”

The fire chief pointed out that, although this year has been wet, there is always the risk of starting a fire or sustaining an injury with fireworks. He requests that complainants text 911 to file a fireworks report, which will be anonymous and does not tie up emergency dispatchers.

National Fire Protection Association reported that fireworks spark an average of 18,500 fires and $43 million in property damage per year nationally, as well as cause injuries. Sparklers, which do not explode, are responsible for one-fourth of fireworks related emergency room visits each year.

In addition to causing injuries and fires, the noise of exploding fireworks can trigger PTSD episodes in combat veterans and scare pets and livestock, the chief pointed out.

If planning to shoot fireworks this Fourth of July, follow safety precautions:

• Do not let young children play with or ignite fireworks.

• Never place any part of your body directly over a firework when lighting the fuse.

• Back up a safe distance immediately after lighting fireworks.

• Never try to relight or pick up fireworks that have not ignited fully.

• Never point or throw fireworks at another person.

• Keep a bucket of water or garden hose handy in case of fire or other mishap.

• Light fireworks one at a time, then move back quickly.

• To prevent a trash fire, after fireworks complete their burning, douse the spent device with water before discarding it