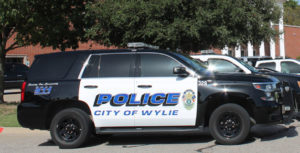 Wylie police ask anyone who may have information about an armed robbery June 7 in the 300 block of Donna Lane to contact the department.

Officers were called to the scene at 1:57 p.m. on a report that a resident of the house had been the victim of an armed robbery.

Sgt. Donald English explained that the victim was meeting with the prospective buyer of a gun that he advertised online and when he opened the door four armed black males demanding cash and guns confronted him.

An incident report filed by investigators showed that the gunmen took $83 in cash and a gun valued at $500.

The victim sustained a minor injury and was treated at the scene by Wylie EMS.

Police request that if anyone witnessed the incident or observed any suspicious activity in the area to contact the police department at 972-442-8171.

Wylie Police Department offers a safe exchange zone for citizens buying and selling e-commerce items. The exchange zone is at the police department, 2000 N. Hwy. 78, and is under constant surveillance and monitoring.

It was never in doubt for the Wylie Lady Pirates. They dominated Lake Ridge throughout the match and won in straight sets.  In the first round, Wylie took care of Horn at their home gym for their
View on Facebook
·Share

Anyone wanting to make a child’s Christmas brighter can donate toys to the annual Toys for Tots drive, which begins Saturday, Nov. 28, and runs through Satur­day, Dec. 12, in Wylie. People want­ing to
View on Facebook
·Share

Are you ready for Black Friday? Start your plan of attack with The Wylie News! In stores and newsstands now! ... See MoreSee Less

The Texas Department of State Health Services released updated COVID-19 information for Nov 25. All counts, except for hospitalized cases, are compiled from the TDSHS website. State officials listed f
View on Facebook
·Share

Check out next week's edition of The Wylie News for more on Lambert's achievement and WISD sports. ... See MoreSee Less