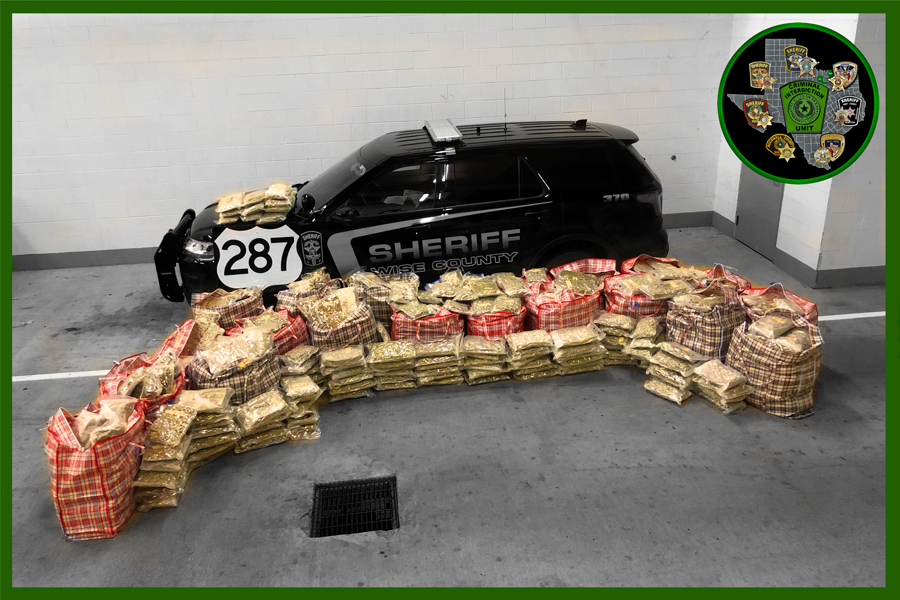 677 pounds of marijuana was confiscated in a traffic stop performed in Wise County by deputies that are a part of the North Texas Criminal Indiction Unit.

Criminals have been put on notice thanks to the efforts of Collin County Sheriff Jim Skinner and the North Texas Criminal Interdiction Unit.

In late 2017, seven sheriffs from Collin, Grayson, Hunt, Parker, Tarrant, Wise and Rockwall counties formed a plan to work together to help cease the flow of illegal narcotics and human trafficking victims being transported across the open highways and interstates of North Texas.

The idea resulted mainly from the opioid crisis and human trafficking issues that are currently being seen in the area.

Forming a 10-deputy team, the North Texas Criminal Interdiction Unit (NTXCIU) was born. This seven-agency initiative is the first of its kind in Texas and the United States. The unit works to interdict dangerous drugs, narcotics, contraband and human cargo.

An integral part of this initiative is the cooperating sheriff’s agreement that any of the deputies assigned to the unit have jurisdictional authority to operate and make arrests within any of the participating counties.

“I’m extremely proud to be associated with law enforcement officers of this caliber,”

Skinner said. “These sheriffs are taking a proactive approach to address our populations and citizens here in North Texas. Human trafficking is a scourge, and narcotics only serve to injure our citizens and our children, both here in North Texas and across the United States.”

For the full story see the June 6 issue or subscribe online.

No matter how hard we try, we really can’t avoid one another. We live in a world where what takes place somewhere else on the globe has a very good chance of affecting us, along with many others. The
View on Facebook
· Share

Water line and street repairs began this morning for the next five to six days at the intersection of Westgate Way and FM 544. City officials advise people to use caution in the area. ... See MoreSee Less
View on Facebook
· Share

Camryn Shupe considered herself lacking a certain charac­teristic before her involvement with SkillsUSA. That trait — confidence — has grown since she started with the national organization that seeks
View on Facebook
· Share