“We always want to see the crime rate go down,” Police Chief Anthony Henderson said. “We have a good community that is working together.”

Crime rate numbers are based on the National Incident-Based Reporting system of the Federal Bureau of Investigation, defined as the number of crimes committed per 1,000 population. Crimes are comprised of eight offenses, broken down into two categories. Violent crime includes homicide, rape, robbery and aggravated assault, and property crimes include burglary, larceny, motor vehicle theft and arson. 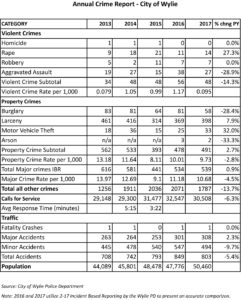 For the full story see the January 17 issue or subscribe online.