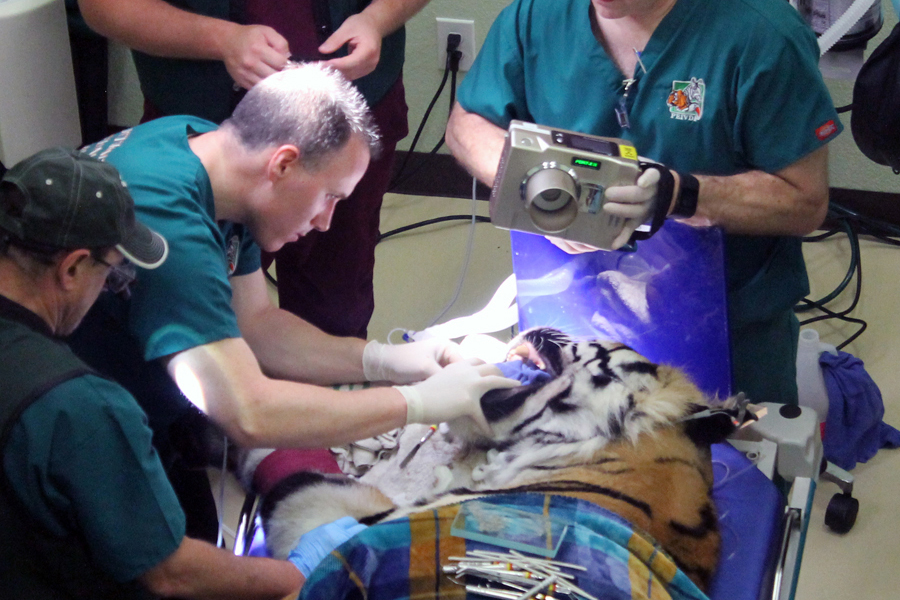 Veterinary dentists, from left, Dr. Eric Davis and Dr. Barron Hall work with Dr. Charles Dyer, a human periodontist, and Dr. Brian Hewitt, a veterinarian, on the teeth and gums of a sedated tiger named Jafar Saturday, June 24 at the In-Sync Exotics Wildlife and Rescue Center in Wylie. The team treated four tigers, one lion and one cougar. (Greg Ford/The Wylie News)

The operating room at In-Sync Exotics was a busy place over the weekend of June 24-25.

More than 13 volunteers from around the nation assisted in the efforts to provide dental care to In-Sync feline residents, four tigers, one cougar and one lion.

A team of five doctors, consisting of three veterinary dentists, Dr. Steven Holmstrom, Dr. Eric Davis, Dr. Barron Hall, one veterinarian, Dr. Brian Hewitt, and one human periodontist, Dr. Charles Dyer, donated their time and traveled to In-Sync to perform the dentistry work. The veterinary dentists and the veterinarian are members of the Peter Emily International Veterinary Dental Foundation, a nonprofit that provides advanced veterinary dental care and treatment to exotic animals located in US in captive animal facilities and animal sanctuaries. After two days of hard work and lots of pre-planning, a total of 12 root canals and one extraction were performed at the facility. Jafar, a Bengal tiger, was one of the recipients of the donated dental work. Jafar was reported as feeling better thanks to the efforts of the team.

“Jafar had several root canals done yesterday and he is back home and doing great!” Angela Culver, spokesperson for In-Sync said, “This morning he was relaxing in the grass next to his pool, happy as could be.”

In-Sync, a nonprofit dedicated to the rescue of neglected, abused, and unwanted exotic felines, is located at 3430 Skyview Dr. in Wylie. It is home to over 70 rescues, including tigers, lions, cougars, leopards, cheetahs, bobcats, lynx, servals and one acelot.

The nonprofit has plans to host a Safari Camp July 10-14. For more information, go to insync.org

For the full story see the June 28 issue and the e-Edition at https://www.etypeservices.com/Wylie%20NewsID245/default.aspx