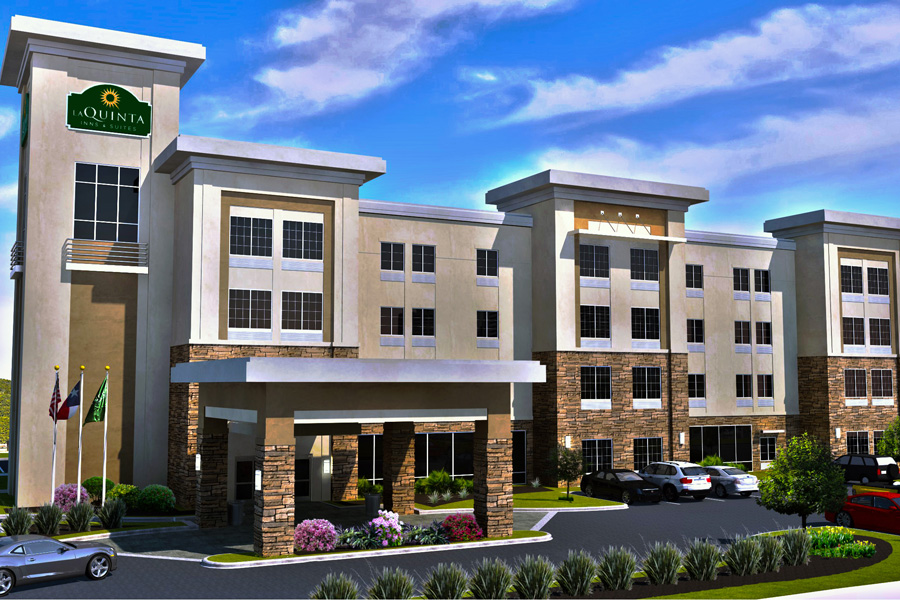 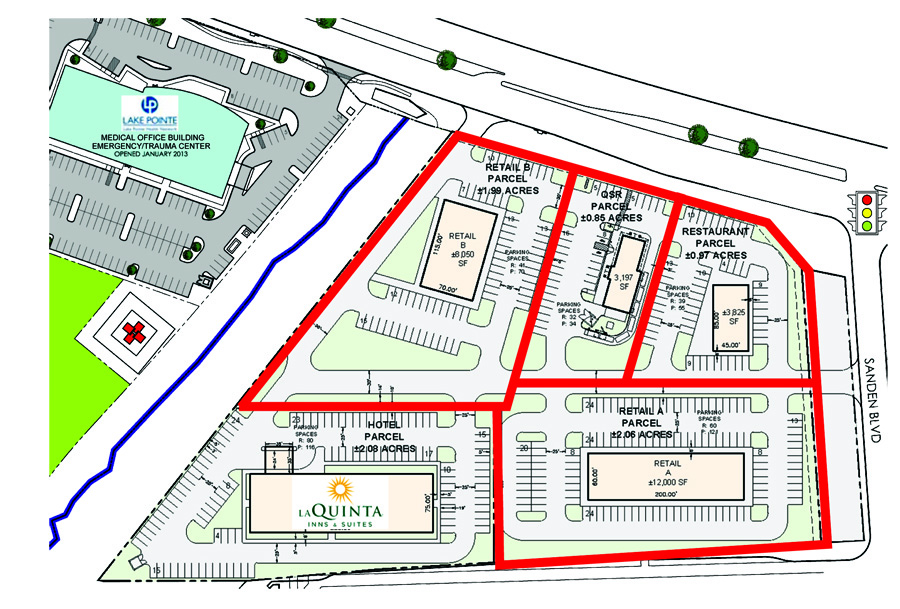 This overhead view shows the location of the new LaQuinta Inn off FM 544, as well as parcels for further development.

Almost a year of negotiations by Wylie Economic Development Corporation have paid off with the announcement of construction of a LaQuinta Inn off FM 544 near Sanden Blvd.

The new LaQuinta will be only the second hotel/motel in Wylie, a town of more than 42,000 people.

The $6 million facility will be built and operated by KREA, LLC, of Garland, owned by Kash Parbhu.

“The WEDC is excited that KREA has chosen the Wylie community for its latest LaQuinta Inn and Suites project,” WEDC president Marvin Fuller said. “This quality project is yet another indicator from the development community that Wylie, Texas is a good investment.”

“It is our hope that the LaQuinta spurs additional investment in the area of Sanden and FM 544 attracting dining and service industry options for not only our citizens, but also those from surrounding communities,” Fuller added.

The project consists of a multi-story building with 77 rooms located on 2.06 acres purchased from a private owner.

WEDC executive Sam Satterwhite reported that he had been working with Parbhu since September 2014, and over that time the hotel grew from 65 to 77 rooms and the meeting room was enlarged to fill a need for meeting space in the community.

“We showed him three different locations and he settled on this one,” Satterwhite said.

Parbhu reported that he has been looking at putting a hotel in Wylie for some time, but needed the number to make sense for the size of his investment. He revisited the idea last year, met with Satterwhite and worked out a deal.

“The core values of the community, as well as the city itself being by far the most courteous and pleasant to work with by wanting more businesses to move there than any other city we have worked with, just tipped us over the edge,” the hotel owner stated.

“The city of Wylie building, engineering, planning and the EDC have been an integral part in our decision to invest in Wylie and we look forward to doing other businesses as well in the city,” he added.

Parbhu pointed out that he envisions the LaQuinta as a gathering place in the city and designed the project with a larger meeting space than usual so that it can host community event.

One factor that makes the location important to WEDC, Satterwhite explained, is that it is a mid-block piece between other more developed areas. The LaQuinta location provides a bridge between other developments.

“It will make the entire area more marketable,” the WEDC executive said.

Offered as an incentive to KREA is a rebate program for the hotel-motel occupancy tax, which is a seven percent tax on hotel room rentals that goes directly to the city.

KREA will receive $100,000 when the hotel is issued a certificate of occupancy and a rebate of hotel-motel taxes for a total of seven years and not to exceed $600,000.

For its part, Wylie will benefit from property and sales taxes associated with the hotel, as well as the facility serving to attract visitors to town.

“We are excited to welcome LaQuinta to our community. Based on the renderings I have seen of their planned building, this will be a great benefit to our city,” Mayor Eric Hogue said. “This hotel chain’s desire to open a location in Wylie shows how we have become a destination city and not just another suburb in the DFW Metroplex.”

WEDC also will work to market property in the vicinity of the LaQuinta. About six acres surrounding the hotel is shown in a conceptual drawing as sites for four additional retail businesses.

The new hotel is scheduled for completion in the last quarter of 2016.