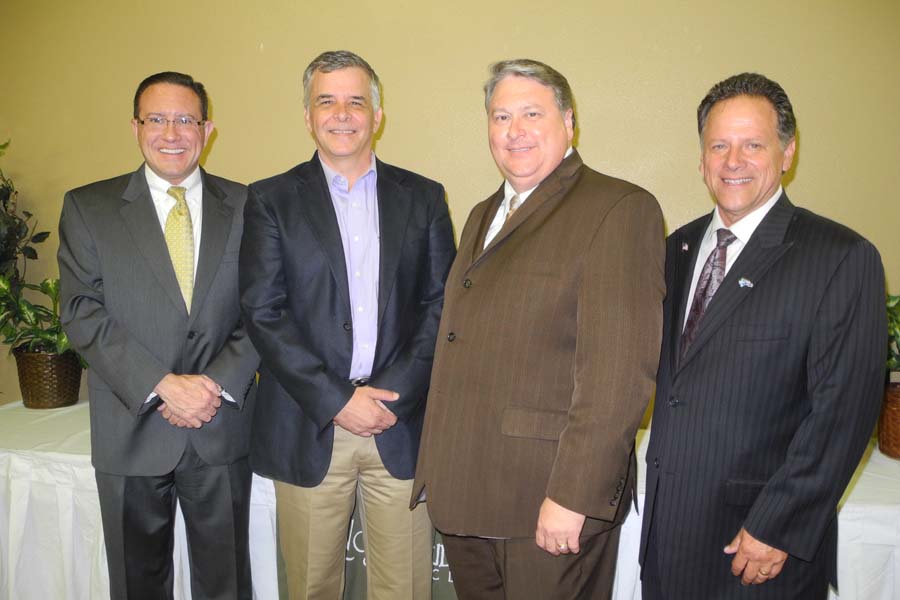 Strong commercial and residential growth in the area was the featured topic at last week’s annual Sachse Chamber of Commerce mayoral luncheon. The luncheon was devised to promote communication and good will between Sachse and its neighboring communities.

“This is one of our most popular lunches,” Sachse Chamber President Molly Hall said. “Each mayor gave a very interesting presentation regarding new and exciting developments in their cities.”

Mayor Eric Hogue kicked off his speech telling the group that Wylie was beginning its 128th year as a community.

“This past year we were able to adopt a fiscally conservative budget that provides funding for excellent services while reducing the tax rate for the 3rd year in a row,” he said. “Our bond rating increased due to a strong economy as well as strong city management and financial practices.”

The city hired 65 new city employees to meet the ongoing needs of the community.

“Our Municipal Court worked hand-in-hand with Wylie ISD to process all Failure-to-Attend-School cases, another example of the great working relationship between the city and the school district,” he sad.

According to Hogue, Wylie Fire-Rescue responded to over 3,336 calls which is an average of over nine calls for help per day. Meanwhile he reported in 2014 the crime rate decreased by 5 percent, despite a 4 percent increase in population.

“In 2014, the city funded the Wylie Police Department Commercial Enforcement Unit, which will focus on ensuring that commercial vehicles coming through Wylie are in compliance with state and local laws,” he said. “This is important, because in a few days, Kansas City Southern Railroad will open its state-of-the-art Wylie Intermodal Terminal, a new $64 million dollar facility.”

Hogue told the audience that Wylie’s National Night Out was once again recognized nationally as one of the best events around the globe, and it continues to grow as a great opportunity for families to come out and meet Wylie’s finest.

Construction began in the fall of 2014 on the Municipal Complex Trail which is a 1-mile, 12-foot-wide concrete trail funded by Collin County Parks and Open Space and by the Texas Parks and Wildlife Department.

“This will be the beginning of Wylie’s version of Central Park,” he said. “The trail opened July 16.”

The city worked in partnership with our sports leagues to provide athletic fields and facilities for nearly 6,000 children to play in organized soccer, baseball, football, and softball leagues in 2014.

“And the list will continue to grow as other businesses realize the benefits of moving to Wylie,” he said.

Our future is bright…and in Wylie…we are wide-awake and looking forward.

Sachse Mayor Mike Felix said that the quality of life for Sachse citizens has “always has been always been at the core of Sachse and “from that core; we continue to see success as we grow.”

Prosperous communities must keep their financial house in order, said Felix, and if they want to continue to grow, in all areas. “In Sachse, we have been able to do just that.”

Felix explained that this year the city refunded existing bonds which will save $100,000 in debt service.

The city has been working with the Kansas City Southern Railroad to construct a Quiet Zone.

“This summer it will be complete and there will be no more train horns.”

Felix said that residential development has been very strong this year with a 6 percent increase in housing permits and no signs of slowing down.

“We are expanding N. Murphy Road from a two-lane rural road to a six-lane urban divided roadway,” he said. “That will include a raised landscape median and sidewalks. The estimated completion of road construction will be in the spring of 2016.”

The Timbers Nature Preserve project is a big project that combines two former park sites into one large community park with over 50 percent of the site being left in a more natural state.

“Construction project and plans includes linking and building a one mile section of trail on the ONCOR easement from South Murphy Road to South Maxwell Road,” he said. “The trail is on the Collin County Wide Trail Master Plan and city staff are working with Wylie and Plano to link this trail to their city trail systems.”

Barna said the park will have fishing, picnic areas and outstanding trails and serve as a local and regional attraction.

The mayor said recently SafeWise named the city of Murphy as the number one Safest City in Texas and in the Top 100 Safest Cities in the USA to live.

“Murphy Fire-Rescue has minimized the use of responding with lights and sirens to some EMS calls choosing instead to use the priority dispatch system to indicate if an urgent response is needed,” he said. “This allows for a safer response with less wear and tear on our fire apparatus.

Rowlett Mayor Todd Gottel was pleased that all the neighboring cities are working together, and his city, like the others, has experienced a great year of residential and commercial growth.

“The President George Bush Turnpike opened in 2011, which was great for all the cities involved,” he said. They believe the downtown Rowlett DART station will bring additional economic development opportunities and growth to the city.

“I am so proud of the city Realize Rowlett 2020 initiative,” he said. “This is a fast-paced, focused initiative to create a vision of Rowlett’s future and a set of action items to make that vision a reality.

The RR2020 project will look at four catalyst areas in detail and identify the framework and regulatory tools needed to achieve the community vision.

Gottel said city officials are in favor of diversity in housing with a mixed-use retail development.