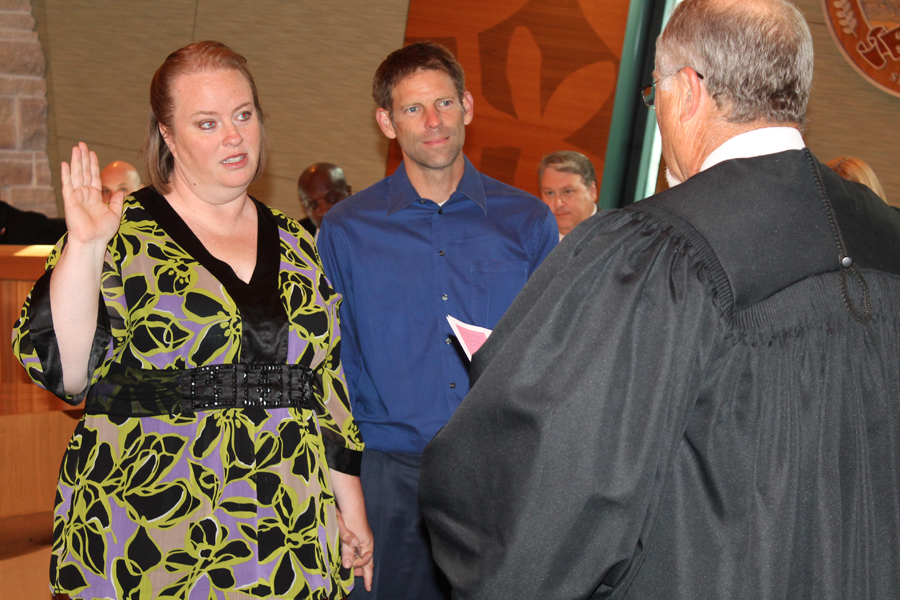 Wylie City Council finished reconstituting itself last week when a new member was seated after runoff election results were canvassed and a mayor pro team was elected.

First order of business was canvassing returns from a June 13 runoff election in which challenger Candy Arrington defeated 2-term incumbent Bennie Jones for Place 4 on the council. Arrington was sworn into office by Judge Terry Douglas and was seated for her first meeting.

To recognize Jones’ service to the city, which included six years as a council member and four years as a member of the parks and recreation board, Mayor Eric Hogue presented the outgoing council member with a granite plaque. Prior to the meeting, a reception was held in Jones’ honor.

To promote fitness activities this summer, the council proclaimed July as Parks and Recreation Month in Wylie.

Elected mayor pro tem for another year was Keith Stephens.

The project, which ties in with another section of walking trail, includes a 12-foot-wide hiking trail, pedestrian bridge connecting with Creekhollow Neighborhood, benches and trash cans, solar trail lighting and a parking lot.

Approval to replat 2.8 acres in Hooper Business Park, creating a pair of commercial lots, was approved after a public hearing in which no comments were received.

The council adjourned into executive session to discuss property located near the intersection of Country Club and Brown Street, but took no action when the session was reopened.