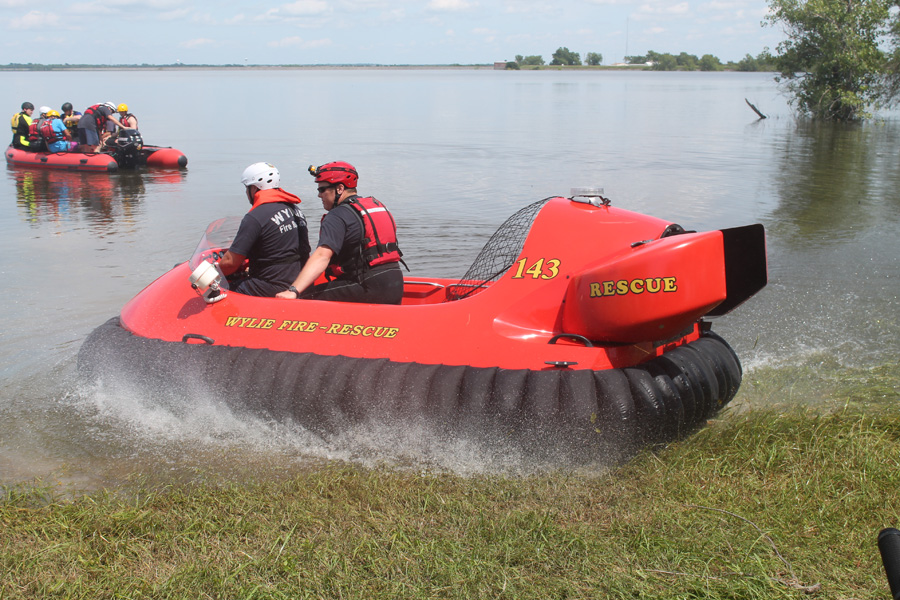 Two of the Wylie Fire-Rescue Swift Water Team rescue boats take off in Lake Lavon last week during a training exercise. A few days earlier, the team rescued a woman from the top of a vehicle submerged in floodwaters.

Although not often called, the Swift Water and Dive Rescue Team of Wylie Fire-Rescue proved that regular practice pays off when it successfully rescued a woman from the roof of her vehicle which was submerged in floodwaters near Sachse.

Four days after the rescue, the team was as Lake Lavon for its annual training session, required to maintain certification.

Swift water manager Capt. Katy Willoughby reports that they had not been called out for an emergency rescue since 2006, but because of regular practice tragedy was averted last week.

“That is the reason we train, is because we have not had a lot of activation,” she said. “We are required to compete eight hours of training every other year. We try to do one major training a year.”

Actually, the team was called out for two rescues on the same day but the second, or a Sachse police officer trapped by rapidly rising floodwaters, was safely extracted by a Texas Department of Public Safety helicopter.

The Wylie team utilized its hovercraft, one of only two maintained by fire departments in the North Texas area, to successfully complete its rescue.

A hovercraft is a water-land vehicle that travels on a cushion of air, making it ideal for use in shallow water which was the case in Sachse.

In addition to the hovercraft, the team has a marine boat that features a pair of 150-horsepower outboard motors and side-scanning radar, a rigid inflatable with an outboard motor, an inflatable that is paddled and a banana boat, which is a special inflatable designed for use in turbulent water.

Willoughby reports that the team consists of 21 trained members, commanded by Asst. Chief Brian Rutter who is in charge of all special operations for the fire-rescue department.