Ballard off limits to trucks 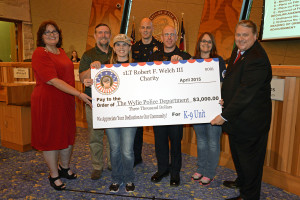 In official action by Wylie City Council last week, commercial trucks are banned from Ballard Avenue downtown unless the drivers are making deliveries to businesses or residences.

The council met Tuesday, May 26, and reviewed truck routes throughout the city, agreed to a rate case settlement with Atmos Energy and accepted a donation to the police department K-9 unit.

Increased pedestrian and vehicular traffic in downtown Wylie led to removing Ballard Avenue from the list of designated truck routes and marked the first modification to routes since they were adopted in 1982. The truck-prohibited area of Ballard runs from Hwy. 78 and north to Brown Street.

School vehicles are not included in the traffic ban, nor or utility company repair trucks and governmental trucks. Commercial trucks may still drive Ballard if making deliveries, but must follow the shortest route to access the road.

Truck route detour signs will be posted directing commercial traffic away from the downtown Ballard area.

In a brief discussion, council members questioned how truck drivers can recognize designated truck routes and it was suggested that signs be posted along the routes as an aid.

To resolve rate cases of the past couple of years, the council agreed to a resolution to grant Atmos a negotiated natural gas rate increase. Motion as made by William Whitney, Place 5, seconded by Stephens and passed unanimously.

Wylie was party with several other Texas communities in denying rate increases made annually by Atmos. All communities must sign off on the negotiated settlement.

Attorneys for the cities pointed out that the negotiated settlement is a “token” concession by the natural gas provider but feel it is better to end the matter instead of continuing to battle in court.

A presentation was made by Becky Welch to donate $3,000 in proceeds from the annual 1LT Robert F. Welch III Run for the Heroes to the police department K-9 unit.