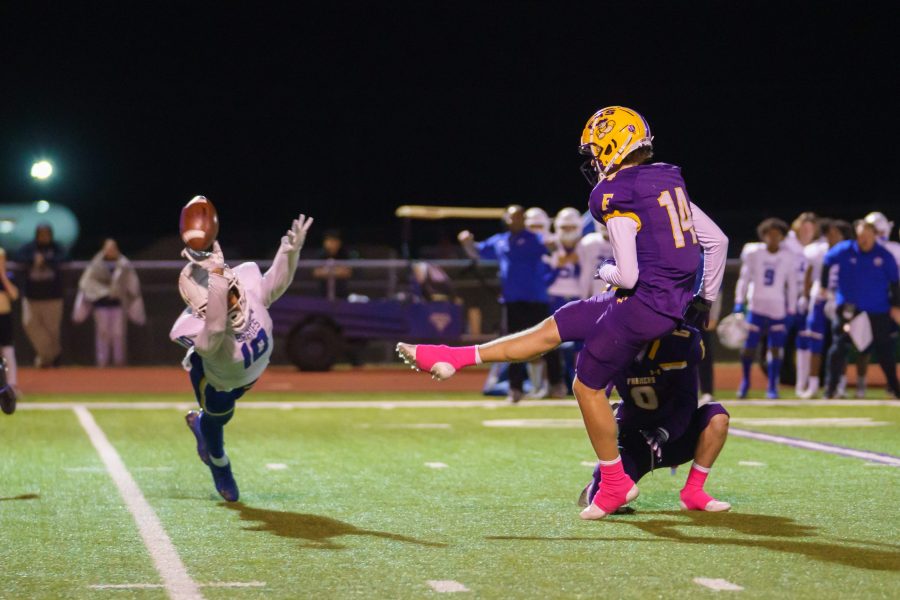 Patrolling the back of the defense for the Community Braves, the secondary might be the best group on the team.

With several returning all-district players across the roster, it doesn’t get much better than the back four for the Braves. They’re led, as head coach Dustin Blann said by a significant margin, by one of the top safety duos in the area.

Quinton Hall and Brandol Hernandez both return after being named first-team all-district on defense in 2021.

The best part about the star duo for Community, however, is their chemistry on the field.

“Our best position group is our safeties,” Blann said. “You’ve got two guys who are first-team all-district safeties. They’re going into year three of starting alongside each other and know each other really well. They think on the same wavelength. Quinton was an all-state honorable mention player and Brandol was right there alongside him.”

With both players entering their third year starting for the Braves defense, coach Blann said they will be relied upon as leaders of the team, particularly in the secondary. With several young players battling for time at cornerback, the two will be used to help push them along during the fall camp and non-district games this season.

“It’s extremely important that they communicate so well and it’s something I’ve very thankful for,” Blann said. “I’m kind of bullheaded about it because both guys can be versatile players and move around but I’d rather them do it for the safety position. With some younger guys playing corner this season their experience and chemistry are going to be so valuable.”

Also in the mix for Community is Tyren Callahan. The rising senior spells both Hernandez and Hall for rest, but sees the field plenty himself. Last season, he had over 30 tackles to go along with three pass deflections and a fumble recovery. He’ll see the field in a variety of roles in 2022.

“He’s been doing that for a few years now and is our Swiss army knife,” Blann said. “He’s in the top 10 percent academically and we ask him to come in and do a lot for us. He’ll play safety, outside linebacker, cornerback and in the slot for us as well. He’s the guy we count on to be able to do multiple things for us.”

Hall was one of the leading tacklers on the team last season, along with leading the team in interceptions and one of the top players in tackles for loss. After receiving an all-state honorable mention as a junior, coach Blann said he expects him to make an all-state team his senior season.

“It’s not hyperbole to say he’s the best safety that I’ve ever been around,” Blann said. “I’ve been doing this for 22 years and he’s a fantastic football player. He’s a great tackler in the open field and it stands out to me how he can get downfield and tackle. He’s done some great things in coverage, but his tackling ability sticks out to me so much in a day and age where secondary players play basketball on grass.”

At cornerback, Charlie Ott returns as a second-team all-district returning cornerback and slots in as the No. 1 corner in 2022. He had two interceptions last season and is one of the best athletes on the Braves roster.

For the full story, see our July 27 issue or subscribe online.