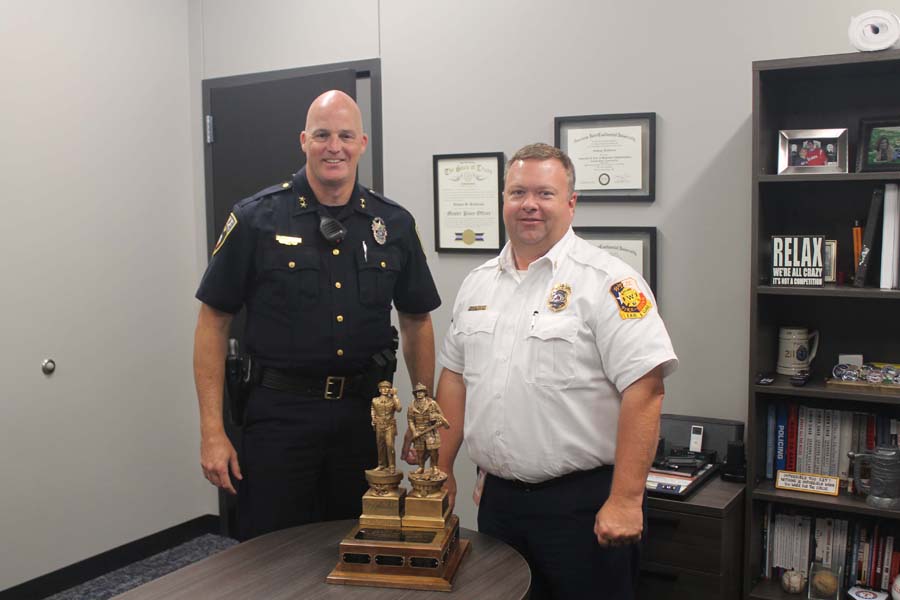 Wylie police Chief Anthony Henderson, left, and Wylie fire Chief Brandon Blythe stand next to a trophy in the annual Battle of the Badges blood drive contest between the fire and police departments at Bluegrass on Ballard.

The Battle of the Badges was waged this year between the Wylie Fire-Rescue and Police departments. Carter BloodCare operates the blood drive and there were three buses this year at the Bluegrass on Ballad festival, said Travis Martinez, a firefighter/paramedic who works at Station #2 with the Wylie Fire Department. On June 28, at Wylie City Hall, Carter will do a blood drive, combining both drives into one.

The Battle of the Badges dates back to 2007.

“It is just a friendly thing, just kind of playing into the Battle of Badges thing,” said Wylie Police Chief Anthony Henderson, about the blood drive. Last year’s blood drive was canceled because of the pandemic.

The record number of donations was 104, set in 2018. After donors give blood, they vote fire or police.

Donors received a T-shirt, and they were eligible for a water craft jet ski with a trailer in a raffle, with Carter buying the prize to be raffled off. Carter’s goal this year was 160 units.