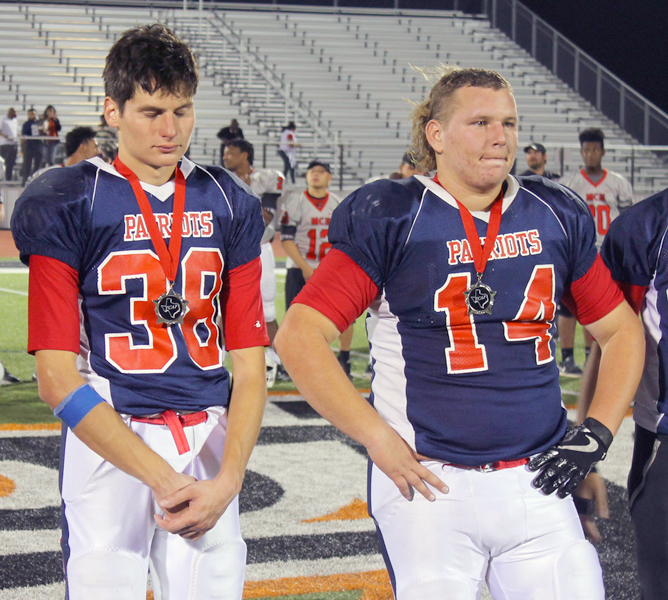 SPRINGTOWN — As darkness descended on Porcupine Stadium last Friday, it also brought with it the realization that the light was going out on the Patriots’ chances for a state championship.

In the end, that was the case, as Wylie Prep ended up on a short end of a 72-57 decision to the Waco Methodist Children’s Home in the 2017 Texas Christian Athletic League six-man championship.

The loss to the Bulldogs — Wylie Prep beat them 66-40 during the regular season — ended an 11-3 campaign for the Patriots, one they hoped would bring them a second state crown in four seasons.

“It was a good year,” head coach Larry Uland said. “We’re (state) finalists … We had great leadership, and the seven seniors we’re losing are definitely going (to be missed). We have some good kids coming back.”

In the past five football seasons, the Patriots have compiled a 43 – 16 overall record, which includes three district championships, two state semifinal appearances, two state title games and one state championship.

(To read the entire article, check out the Nov. 29 edition or subscribe online)

The Texas Department of State Health Services released updated COVID-19 information for Jan. 31. All counts, except for hospitalized cases, are compiled from the TDSHS website. State officials listed
View on Facebook
· Share

The Texas Department of State Health Services released updated COVID-19 information for Jan. 30. All counts, except for hospitalized cases, are compiled from the TDSHS website. State officials listed
View on Facebook
· Share

Dallas County Health and Human Services reported 20 deaths and 1,407 additional confirmed cases of COVID-19 for Jan 30. Officials said the 183 deaths this week were the highest weekly count since the
View on Facebook
· Share

Student to attend Yale wants STEM career Wylie East High School se­nior Esteban Figueroa didn’t think he would be angling for a spot in an Ivy League school when he entered high school. Neither did he
View on Facebook
· Share