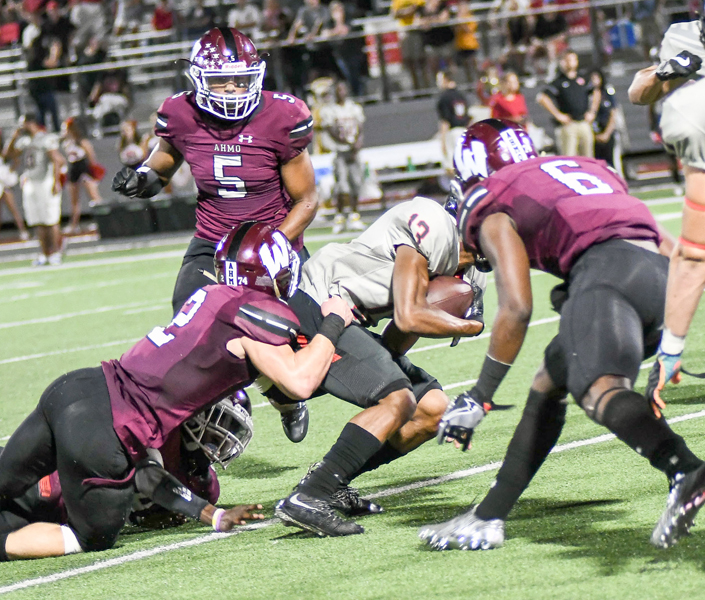 Members of the Wylie defense close in on a Lake Highlands ball carrier during the Pirates' 10-7 victory on Sept. 15.

The Pirates and Panthers will meet once again this Friday at Wylie Stadium. It’s a renewal of a rivalry that’s had the potential to be one of the best in Texas, but has never really taken off.

There are many reasons for that, but one of primary ones is that for many years, the two teams were in different classifications. However, with Wylie and PESH now in Class 6A, and currently in the same district, the opportunity for the rivalry to start blossoming, specifically with this Friday’s 6-6A opener at Wylie Stadium.

The Panthers won last year’s match up, and both teams enter the 2017 contest 1-2 after the non-district season and a bye week. Wylie went into that bye off a 10-7 win over Lake Highlands, while an injury-filled PESH team fell 56-21 at Arlington.

“I think it has great potential to be a rivalry,” Plano East head coach Joey McCullough said, “because we’re so close (to each other). We’re really separated by a street (Murphy Road).”

That means a number of kids will attend Wylie, while their neighbors head to East. That kind of familiarity will breed rivalry, particularly on the athletic field.

“I don’t see why it wouldn’t (become one), because we’re in each other’s back yard,” Wylie head coach Bill Howard said. “All of our kids know their kids … We have lots of kids who switch (the) schools. Both of us have a lot of tradition, and in the past have been successful … It’s always going to be a fun game.”

(To view the entire article, check out the Sept. 27 issue or subscribe online)