Wylie Police are investigating a shooting victim found in the area of the Wylie Complex Walking Trail located east of the Wylie Municipal Complex. 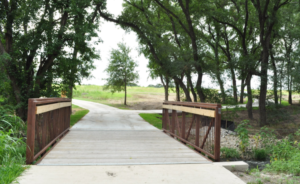 Police responded to a call at 8:43 a.m. of possible shots fired near the walking trail. According to reports a bystander stated that they had heard at least one shot while walking along the trail.

When officers arrived, Wylie police dispatch received a second report that a male subject was (walking) along the trail and possibly suicidal.

Officers evacuated the area and requested assistance from the Texas Department of Public Safety helicopter to help search the area.

At 10:39 a.m., the helicopter, DPS 1, located a victim in the area of the search. Wylie Emergency Medical Services responded to the location and discovered the body of a 35-year-old Wylie male resident. No identity has been released at this time.

The Collin County Medical Examiner’s Office also responded to the scene to conduct an inquiry into the shooting.

Wylie Police investigators are currently investigating this case as a possible suicide.

The Wylie Municipal Complex hike and bike trail is 1 mile long and 12 feet wide and loops around the library, recreation center and city hall. The trail includes a 20-foot pedestrian bridge over a creek. Access to the trail is from Brown St., Country Club Rd., or behind the Recreation Center.