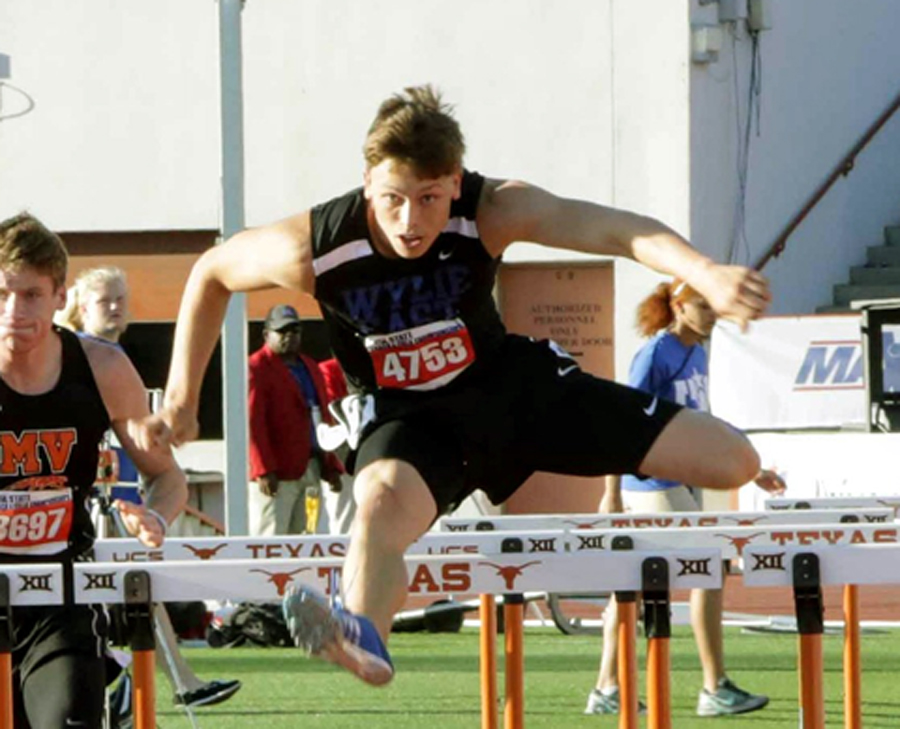 Wylie East senior Justin Young clears the final hurdles en route to winning the gold in the state 110-meter hurdles this past Friday in Austin. Young later took first in the 300 hurdles. 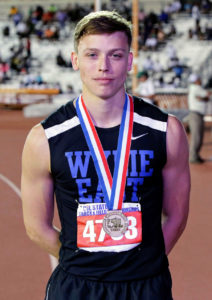 Justin Young was a confident young man heading into last weekend’s state track and field meet, and, as it turned out, that self-assurance was justified.
Over the course of two hours, Young, a senior at Wylie East, captured the gold in both the Class 5A 110- and 300-meter hurdles, while competing at the University of Texas’ Mike Myers Stadium against the best prep competition the state has to offer.
He is the second East representative to win a state title in the school’s short history, the other being the 2015 Wylie East girls’ soccer team.
Young, who had dominated the 110 and 300 races during the district, area and regional competitions, again finished well ahead of the pack in Austin. He captured the former in a time of 13.95, and the latter in 36.90. Teammate Kieron Hunter, a junior, was fifth in the 110 with a time of 14.36.
Finishing between Young and Hunter were Hutto’s De’vion Wilson (14.02), Arlington Seguin’s Joseph Squire (14.13) and Fort Bend Marshall’s Dominick Houston-Shepard (14.30).
Amarillo’s Calahan Newsome (37.02) was second in the 300, followed by Wilson (37.44), Manvel’s London Harris (38.10) and Laredo Martin’s Angel Davila (38.95).
The double-gold victory ends Young’s prep career; he was state finalist a year ago and finished seventh in the 110 hurdles. After graduating later this month, Young will begin preparations to attend the United States Military Academy at West Point.