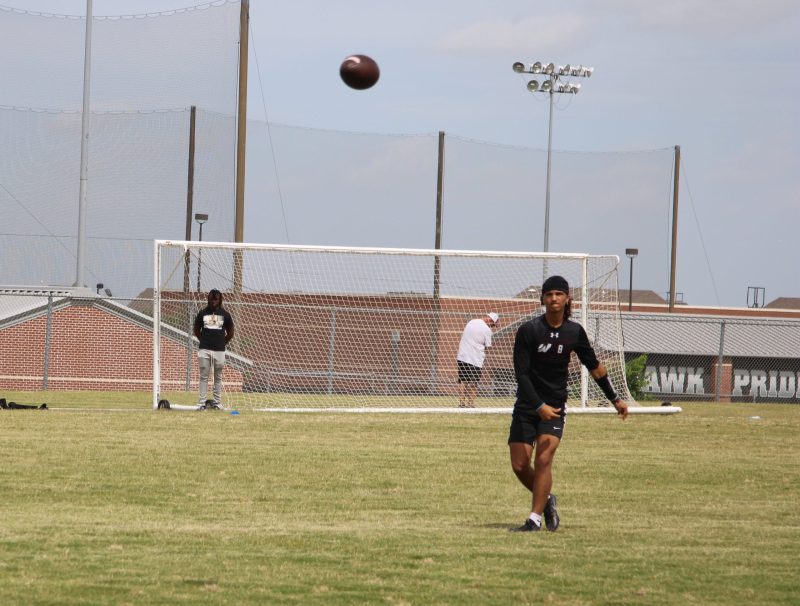 For the second season in a row, the Wylie Pirates are replacing their starting quarterback.

Last summer, senior Isaac Phe arrived late in the summer and was able to win the job, finishing with a strong season under center. Now enrolling at the University of Mary Hardin-Baylor in the fall, the position is much less clear entering the 2022 season.

“It’s difficult to move into the starting role,” head coach Jimmy Carter said. “Isaac came in and had some varsity experience, but none of these guys have those reps. Two will be sophomores and a senior who didn’t play last season. So, the experience will be tough and we’ll work through the kinks early in the season.”

The Pirates are working out senior Nicholas Vascocu, junior Aidan Atwell and sophomores Jagger Bale and Layton Leachman early in the offseason. All four players saw reps during the spring game, while Bale and Vascocu got plenty of time in with the receivers at 7-on-7 games in Hebron.

Coach Carter said there were qualities to like about all four starters, with the position battle likely to go into fall camp.

“With what we’re looking for in the position is someone who can take charge and lead the team,” Carter said. “We want them to have a little bit of confidence and all four of them showed a little bit of that in the spring. Maybe one sort of separated themself but we’ll see how it looks in the fall camp.”

The two sophomore quarterbacks split time last year on the freshmen team, switching off series throughout the season. Each presents different skill sets for the varsity team, but coach Carter said they’ve impressed despite their age and lack of experience.

“Jagger’s ability to run and throw really stood out in the spring and has a real swagger to his game,” Carter said. “He’s a catcher in baseball and kind of has that leadership ability in both sports. Both of those guys are good quarterbacks and bring different things to the table. We’re excited to see what they can do.”

While the four players all compete, the key for Wylie to determine its starter is by giving all four players a chance under center. All players have worked with the first team and getting them up to speed will be key.

“With each of them we gave them reps with our first team offense against our first team defense, so that’s how we’ll evaluate them,” Carter said. “It allows us to kind of mix things up and put players in different situations as they prepare and see something resembling the speed of a varsity defense.”

For the full story, see our July 27 issue or subscribe online.