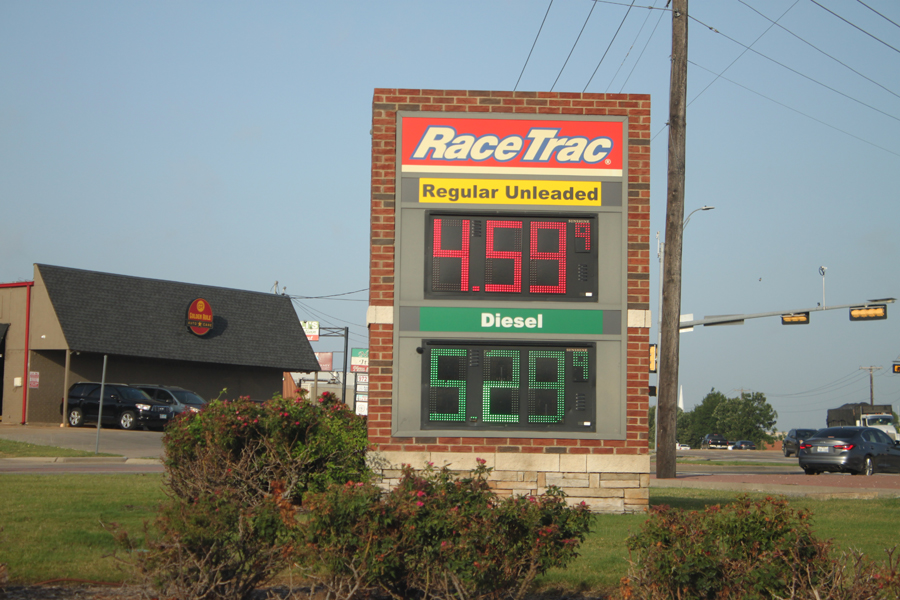 The increased oil demand continues to outpace global supply, resulting in high gas prices across the state, the nation and the world.

As a result, the national gas price average on June 13, was $5.014 per gallon, the highest recorded average price.

According to AAA, the average cost per gallon in Texas was $4.664. The average price for diesel fuel is $5.258 per gallon.

Collin and Dallas Counties were higher than the state average at $4.691 and $4.658, respectively.

California currently has the highest average gas prices at $6.436, and Georgia has the lowest at $4.484.

“It’s likely prices will continue to fluctuate and remain elevated,” said AAA Texas spokesperson Daniel Armbruster. “At least until summer driving season is over after Labor Day or until the issues of tight global supply and demand of crude oil are resolved.”

Armbruster explained that retail prices from gas stations across Texas and the United States are tracked daily by Oil Price Information Service. AAA Texas contracts with OPIS to receive the data.
Historically, high gas prices have not deterred people from traveling during the summer months, Armbruster said, but it does impact daily commuting behaviors by creating carpools or running fewer errands.

However, Armbruster said AAA is currently expecting record-breaking prices to have a ripple effect on some aspects of travel and other economic areas such as goods and services.

“Families may opt to eat out less on a trip,” Armbruster said. “Or stay in a four-diamond hotel instead of a five diamond.”

Recent AAA surveys show that 75% of Americans say they would change their driving habits or lifestyle if the cost of gasoline rises to $5 per gallon or more.

Of US adults who said they would make a change to offset gas prices, about 80% they would do so by driving less.

Adults 18 to 34 are almost three times as likely to consider carpooling, said Armbruster, which would likely involve significant changes to their daily travel plans.

Older adults are more likely than younger adults to favor combining errands into one trip and reducing shopping and dining out.

More than half, 52%, of adults surveyed have summer vacations planned this year. Of those, 42% said they would not consider a change regardless of gas prices.

Because of the current price fluctuations, Armbruster said there is no better day than another to buy gas, as normal patterns are pushed aside because of market volatility.

Currently, there are no talks of eliminating the state tax in the Texas Legislature, but Armbruster offered several tips to save at the pump.

Drivers should ensure that their vehicle is in good shape during routine inspections and that tires are correctly inflated.

Planning for the drive is another tip Armbruster offered, saying that drivers should map their route before leaving to minimize unnecessary turnarounds and backtracking.

Armbruster also suggested drivers should avoid peak traffic times when they can, adding that errands should be combined when possible.

Fuel economy peaks around 50 mph on most cars and then drop off as speed increases, said Armbruster. Reducing highway speeds by five or 10 mph can increase fuel economy by as much as 14%.

Likewise, Armbruster suggested drivers should avoid excessive idling, which consumes one-quarter to half a gallon of fuel per hour.

“A warm engine only takes about 10 seconds worth of fuel to restart,” Armbruster said. “When safe to do so, shut off your engine if you will be stopped for more than a minute.”

Lastly, Armbruster said drivers should use the gas recommended for their vehicles.

“If regular gas is recommended, that’s all you need,” Armbruster said. “Opting for premium when your car doesn’t require it will only cost you money and doesn’t improve fuel economy.”