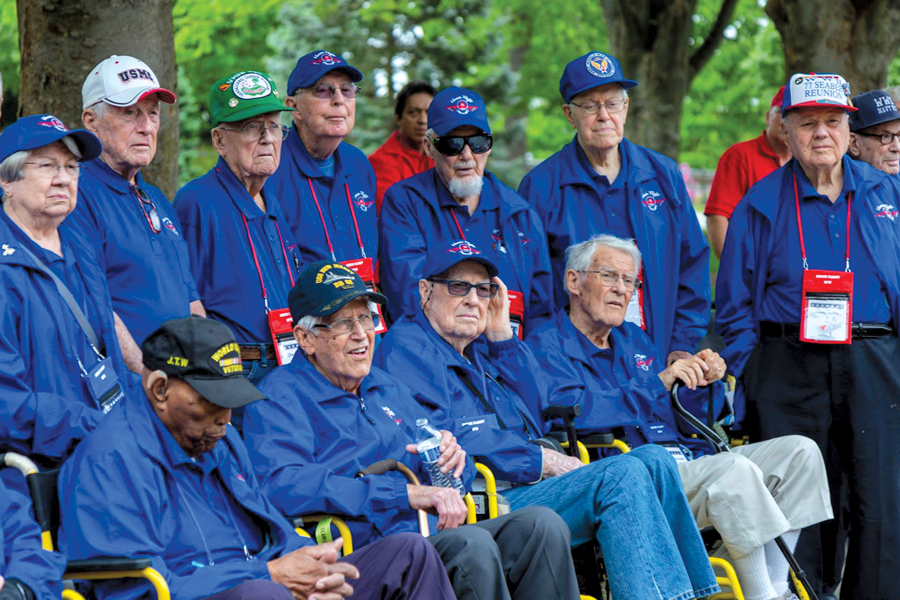 Honor Flight DFW honors heroes one flight at a time

“The time is short and the mission is big” is a mantra often recited by volunteers involved with Honor Flight DFW.

The nonprofit organization was created to honor America’s veterans living in the North Texas area for their service and sacrifices.

Every time a flight lands at Love Field, friends, family members, and even some strangers, arrive to wait for a very special flight returning to Dallas from Washington, D.C. with some incredibly special people.

At the gate welcoming the June flight, Honor Guard members arrive and take their places. A Welcoming Committee has set up a table with flags and a red carpet is rolled out exclusively for Flight #38 passengers. Patriotic spectators anxiously wait to see the 40 veterans make their way off the plane. Cheers and clapping are heard all around. In their signature blue jackets, some walk, some are in wheelchairs, but their smiles are broad as they realize all the fanfare is just for them.

Ranging in age from 65 to 91, the veterans are reunited with their families, receiving well-deserved hugs and handshakes.

Though years late, this is the grand welcome they deserve, and it would not be possible without Honor Flight DFW.

The Honor Flight all-volunteer group takes veterans to Washington, D.C. for a once in-a-lifetime, all-expenses paid trip to reflect at their memorials and to share that moment with the only people who could possibly understand – other veterans. President Melaine “Tudy” Giordano, a nurse and gerontologist, calls these veterans “the quietest generation who did the most for the world.” She works tirelessly, along with Secretary Judy Heaps, to promote the organization and fundraise so that these veteran “heroes” can take a trip well deserved.

HFDFW needs your help in identifying local veterans who would like to make the trip. If someone you know is a World War II veteran and still able to travel, submit his or her name to the list right away. The time to thank these veterans who served is quickly running out with many of them advanced in age and poor health.

Giordano said, “Sadly, on average, 15-25 percent of the World War II veterans will have passed away before they get a chance to take the trip. “The goal of Honor Flight,” states Giordano, “is to get the WWII veterans off the list and have them complete their trip as quickly as possible.”

The average age of a veteran on the HFDFW waiting list is 89 years old, but two that traveled have been as old 100. “WWII is decreasing as the baby is now 90, but they still are applying to travel,” Giordano said. “In fact, we have a gentleman on Friday’s flight (#38 June 15) that is a three war era veteran (WWII, Korean, and Vietnam) he is a rarity these days.”

After HFDFW flies the remaining World War II veterans, then Korean and Vietnam War veterans are the priority, followed by the veterans of the more current wars.

In June, HFDFW completed their spring flying season, hosting 79 veterans, 18 of whom were WWII veterans.

“Applications for WWII, and then Korean, go to top of list and then health is considered,” reported Heaps. “Otherwise we take veterans according to the date we receive the applications.”

Though four trips have been made in the fall season in the past, this year only one trip was made in September. A typical trip hosts about 40-44 veterans.

How you can help

HFDFW is a 501C3 Corporation dedicated to honoring veterans with a trip of a lifetime. It is strictly volunteer run. There are no paid volunteers and there is no overhead – only a storage unit and a fee for the database.

They are always in need of funding to make these trips possible.

Time is running out. There are currently 200 on the waiting list (most of them Vietnam) and the fall season was cut short due to lack of funding. Honor Flights’ policy, said Heaps, has always been that if they have money, they fly. “We “think” we might have money for another trip in fall but have decided to not risk that,” Heaps said. “We have several things in the works-annual golf tournament Oct. 8–and couple of other things we think will bring in funds so that we can get back next year to our four flights a year.”

“This trip and the HFDFW uniform means more than we could possibly know,” Tudy said.

Many veterans request to be buried in their Honor Flight DFW uniform says Tudy, and family members often request donations to HFDFW in lieu of flowers.

“We have a young man that has been volunteering with us in different ways,” Heaps said. “He graduated high school and asked that instead of graduation gifts, money be donated to HFDFW. That total exceeds $1200 last time I looked,”

Heaps and Giordano both began their journey with HFDFW years ago. “I have been with HFDFW since I went with my dad on the first flight in June 2009,” reported Heaps. “Tudy and several others have been with us since the third trip.”

Heaps completed her 34th trip with Honor Flight in June. She said their many volunteers make a strong foundation but they always welcome new ones to keep the energy going. Guardians are needed for each trip and volunteers are needed to assist in fundraising efforts, writing letters to the World War II veterans, driving veterans to the airport, to reunions, to fundraising events, celebrations and more.

The trips are not casually planned, and a lot of work goes into each flight beginning months in advance. Every detail is covered, and extreme diligence is paid during the journey to ensure the safety and comfort of the veterans.

Veterans are assigned a guardian, or a ‘butler’ as they prefer to call them. A guardian is a volunteer who pays his or her own way to D.C. for the honor and privilege of assisting the veterans for the duration of the trip. They cannot be older than 72 and must be physically able to endure the walking and possible lifting involved. They receive training to help them prepare for the logistics, precautions and challenges of traveling with this unique group.

There is a medical team that travels with Honor Flight DFW which consists of a highly trained staff of physicians, respiratory therapists, nurses and other clinicians who are on call day or night offering comfort not only to the veterans, but to the families they leave behind. Medical volunteers contact each veteran prior to the trip to identify those with special needs and ensure those needs are met during the journey.

The two-day, 36-hour trip begins with a celebratory send-off, including a bon voyage USO breakfast, presentation of the colors, bands playing and volunteers cheering and waving flags. The Honor Flight veterans are given signature blue Honor Flight jackets and hats, often pinned with their war medals.

Upon arrival in D.C, once again, these brave veterans get a hero’s welcome. Honor Flight volunteers, USO volunteers, local active duty military and airport bystanders get in on the action.

The first stop on the trip for the honorees is the National World War II Memorial, which opened in 2004. At the time, many of the veterans were in their late 70s. The memorial honors the 16 million who served in the armed forces of the U.S., the more than 40,000 who died, and all who supported the war effort from home. Next, the veterans tour the Korean, Vietnam and Lincoln Memorials before attending a Heroes’ Banquet that evening where an honor guard presents the colors and active military service personnel are guest speakers.

Day two of the trip begins at a slower pace with veterans enjoying breakfast and trading war stories. They tour Arlington National Cemetery where veterans witness the Changing of the Guard at the Tomb of the Unknowns, and often they have the opportunity to participate in a Wreath Laying Ceremony.

Up next is a visit to the graveside of fellow Texan, Audie Murphy, the most decorated American World War II soldier. From there they tour the Marine Corps War Memorial, the Air Force Memorial and the FDR National Memorial. At Bolling Air Force Base the men and women are treated to a special concert by the ‘Singing Sergeants’ adding some fun, and perhaps even some dancing, ending their day on a high note.

The trip back to Texas is just as special as veterans receive “Mail Call” on the plane. They open letters from friends, family, local school children and other well-wishers who simply thank them for their service. After landing at Love Field, many of them will see each other again at a reunion three months later.

A small price to pay for their service

Trip costs on average run approximately $1,200 per veteran and cover everything from plane fare, meals, buses and much more. “Each trip costs $45,000. We fly commercially as chartered flights are cost prohibitive,” Tudy said. Anyone can “adopt” a veteran to send them on this trip of a lifetime. Individuals, groups or companies who choose to adopt a veteran receive a veteran’s profile and the opportunity to help send off and welcome home veterans on their next HFDFW trip.

With over 200 on the waiting list, most of them Vietnam, and 40 veterans per trip, Heaps said they will continue travel into 2019.

Since they first began flying veterans in September 2009, over 1700 veterans have made the journey to Washington thanks to the nonprofit. As long as Honor Flight continues to receive donations, they will continue flying veterans.

“World War II veterans had a clear mission and a clear victory,” Heaps said, “Korean veterans are from that forgotten war—when these veterans returned, people ask where they had been. When they said Korea, people didn’t know much about that. With the Vietnam veterans, these men and women were treated so horribly by their fellow Americans, and many have some strong negative feelings. I have heard and read in thank you letters many times the words, ‘I think I can now turn loose of some of the anger.’”

They deserve a trip of a lifetime for their service to our country, and with your help that can be achieved.

Workers available for elections in county

Although a few workers have opted out of helping with elections this fall because of the COVID-19 pandemic, Collin County Elections Administrator Bruce Sherbet does not foresee problems with staffing
View on Facebook
·Share