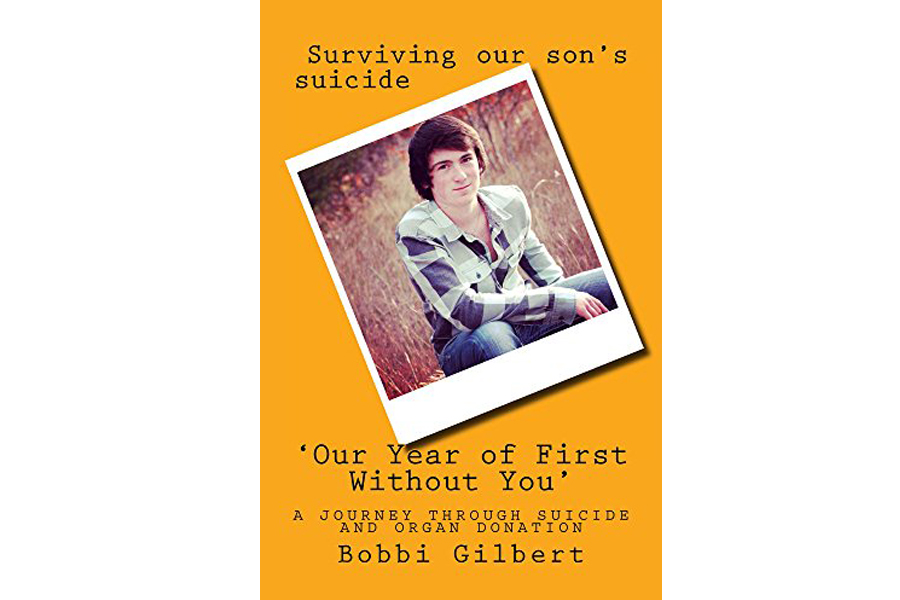 On a mission to shed light when there is darkness

One mother’s journey after her son’s suicide

Bobbi Gilbert is on a mission. A mission to spread awareness about suicide and the devasting ever-lasting effects it has on families.

Her son, Pierce, committed suicide April 20, 2015 at the age of 17. A senior at Whitewright High School at the time, Pierce’s diagnosed depression combined with a dysfunctional relationship; his “girlfriend” was the breaking point that led him to make the choice he did that fateful day. He pulled his truck into her driveway in Princeton early one morning and shot himself in the head. He left a picture of his sister Morgan on the passenger’s seat and a note for the girl.

Bobbi’s story about the events leading up to Pierce’s death and the long painful year following his death is recounted in her book titled, “Our Year of First Without You,” a journey through suicide and organ donation. The 151-page book is a compilation of stories about her son, photos of him and other loved ones, poems, Bible verses and much more. The pain and loss is evident on each page.

“I felt compelled to write these books in hopes of preventing anyone else from having to go through this,” Bobbi said. “As they say, no parent should ever have to bury a child. And, it’s far worse when it’s suicide.”The day Pierce died, a county sheriff delivered the news to Bobbi and Tim Gilbert, along with their daughter Morgan, at 5:30 a.m. that day. Amid the frenzy of the news and looking for car keys, they discovered Pierce had left a note on his dad’s computer, telling him where he’d hid their car keys and where he put his dad’s phone.

Pierce was transported to Medical City Plano via Care Flight. At 8:30 a.m. the doctor informed the Gilbert family that they were not detecting any brain activity but they wouldn’t be able to confirm it until they performed a scan. At 2:45 p.m. they received the results. There was no brain activity.

Bobbi wrote, “We asked if we could see him. They led us down the hall to his room. The doctor walked in first, followed by Tim and then me. I took one small glance and turned and ran out of the room. He looked like he had been beaten with a baseball bat! His head was wrapped with gauze and his eyes were swollen and bruised.”

The nurse stated that Pierce’s driver’s license indicated he was an organ donor but because he was a minor, parental consent was needed. After the process was explained, Bobbi and Tim gave their consent to the doctors.

To be a viable donor, there are a number of tests that are done to confirm if a patient is a good donor. First, they typed Pierce’s blood and tested him for any diseases. Once his results were clean, the search for donors began. In Pierce’s case, they were able to harvest seven of his organs, which according to the hospital, was a rare record-breaker. The average number of organs donated is three.

Despite this journey from the death of their son, Bobbi is resolute in her effort to bring her mission to the forefront.

“My mission is to help bring awareness to the subject of suicide and prevention,” she said. “I hope to save lives by either preventing someone else from making the choice Pierce did that night or by persuading someone to sign up as an organ donor, then that will be my legacy for him. His legacy was saving five lives with seven life saving organs.”

Pierce suffered from depression in the sixth grade and had not had any trouble with symptoms again until a friend was killed in a car accident a year earlier, then he began dating the sister of that friend a year later. That relationship was toxic for Pierce. Bobbi mentions in her book, Pierce’s struggles with depression cropped up again once his girlfriend broke up with him on his birthday.

She writes, “ He agreed to go back on the medicine he took when he was depressed in the sixth grade. At that time, he was prescribed a low dose of ADD medicine with an anti-depressant and it worked. But now he refused to take an anti-depressant because ‘he read on the internet what they can do to people.’”

Soon after, when Pierce overdosed on Tylenol – and his girlfriend knew about it –he was transferred to a mental health facility. He stayed for a week and was released for continued counseling with a therapist and a psychologist.

Pierce’s relationship with that girl changed everything and Bobbi believes he would still be alive today if it were not for her.

“No! Never would it have happened if it hadn’t been for her months of torment, using him, etc.,’ she said. “With this said, he was so highly intelligent, so well read, and that, combined with his OCD and seeing the world as black and white, that also led to this decision”

Today, Pierce lives on in five people. The Gilberts have met the majority of the recipients. Alicia, a 48 year-old teacher from Mansfield received his left kidney/pancreas. David Ray, a 34-year-old from Chico received his heart.

“I have a tattoo of P’s heartbeat from David Ray’s 1-year check up. (His heart fit perfectly into David Ray.) The surgeon told him the person who donated it had to be of the same size and stature as him since it fit perfectly otherwise, there is usually wiggle room, either up and down or side to side,” Bobbi said. “Bryant, his lung recipient, is 28-years-old and lives in Lubbock. P’s lungs were a 100 percent match for him which never happens unless it’s an identical twin. He (Bryant) was the 500th lung transplant at UT Southwestern and our friends showed us the Dallas Morning News article about it a few months after P’s passing and we all knew it had to be P’s lungs, so that’s what led to us meeting his recipients. Christina, the liver recipient, is a mom, wife, and grandmother from Ft. Worth. She needed a liver due to an inherited liver disease. Her dad passed away last December from it.”

The only person the Gilberts have not heard from or met is the recipient of his right kidney – a 20 something year old.

Organ donation not only saves lives but often a recipient will gain some traits from the donor.

“Alicia never liked jalapenos before, but now does, “ Bobbi said. “Her hair has always been sandy blond, but now her roots are jet black like P’s hair.

Bryant never liked nachos, pizza or jalapeños, but now he does. He could never fix anything before, but now can repair a car.

David Ray only listened to head banger hard core rock music, wore skinny jeans and vans (before the donation). Now he listens to Texas Country Music, wears boots and wranglers. He was painfully shy, would barely speak to his aunt and uncle when he saw them in town. Now he runs up to them and jokes around and picks on them.”

A second book released earlier this month titled, “Living without You” continues Bobbi’s journey through her second year without her son.

“It is a continuation of our story since so much continues to happen in our life that pertains to Pierce, after our year of first without him, Bobbi said. “I share the impact his suicide continues to have on us, our family, and his friends. I share the note he left for the girl. I share updates on his recipients and his friends. I share articles about depression and dealing with someone who is suicidal. I share papers written by others who have attempted and survived.”

Pierce was a former student at Lovejoy High School. Bobbi returned to the school and spoke last year to an audience of mothers, family friends, teachers and students with passion only a grieving mother can have, intimately detailing the events leading up to his death, his depression and showing family photos.

As holidays and special events come and go without her son, Bobbi works tirelessly to spread her message through guest speaking engagements such as the one at Lovejoy, postings on Facebook and LinkedIn and on her blog. She will be the featured speaker at the Out of the Darkness Walk in Bonham Oct. 7.

To learn more about her journey, go to survivingoursonssuicide.com.

Please share and pray for these missing children! 🙏🏻For the past 12 months our posters have shown the following number of children:Total Missing children: 80Found: 61 Still Missing: 14 Found but missing again: 5 Thank you for your support and prayers! ... See MoreSee Less
View on Facebook
· Share

The Texas Department of State Health Services released updated COVID-19 information for Feb 4. All counts, except for hospitalized cases, are compiled from the TDSHS website. State officials listed ni
View on Facebook
· Share

Wylie East girls basketball was a perfect three for three during the week, putting them on the verge of a district title. The Lady Raiders, ranked No. 13 on the Texas Girls Coaches Association 5A poll
View on Facebook
· Share

The Texas Department of State Health Services released updated COVID-19 information for Feb 3. All counts, except for hospitalized cases, are compiled from the TDSHS website. State officials listed 10
View on Facebook
· Share