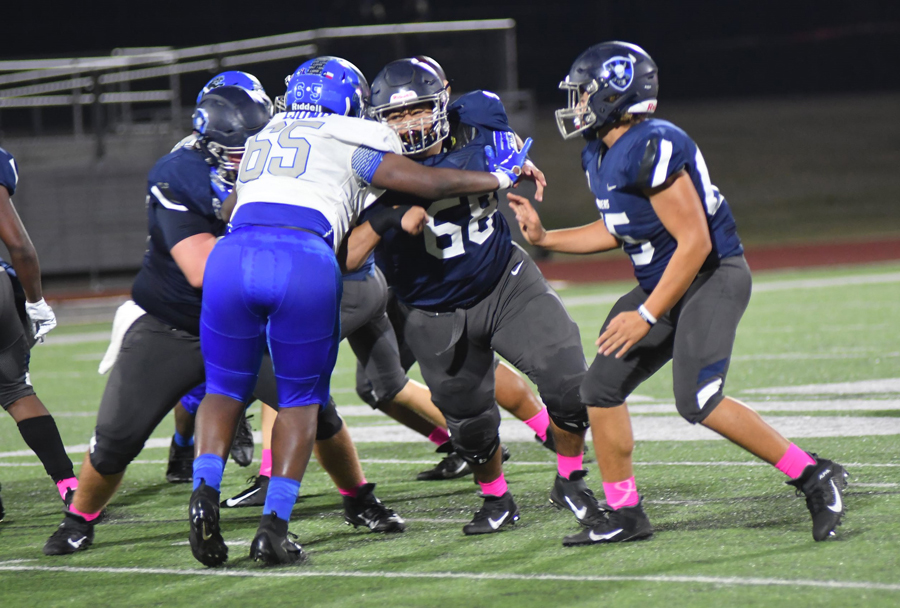 MCKINNEY – Wylie East football is on the hunt for its first win in District 7-5A Div. I.

They’ll look to pull off the feat against McKinney North at 7 p.m. Friday, Oct. 11.

The district contest will be played at McKinney ISD Stadium, located at 4201 Hardin Blvd.

For scoring updates follow The Wylie News Facebook page. The story and photos will be in the Oct. 16 issue.

Dave Campbell’s Texas Football magazine picked the Bulldogs to finish third, behind John Tyler, first, and Mesquite Poteet, and ahead of West Mesquite.

John Tyler got on the board first in the opening quarter with a Cameron Ford 1-yard run. Victor Leon tacked on the point after at the 6:12 mark.

They scored twice more in the second quarter for a 21-0 halftime lead.

Frank Turner hauled in a 34-yard toss from Cameron Ford and Kitan Crawford caught a 52-yard pass from Ford.

Leon was successful on the extra point kicks.

Wylie East had six first downs on 99 total yards. They passed for 62 and rushed for another 37.

John Tyler picked up where it left off in the second quarter, with a touchdown to start the third.

Ford hooked up with Turner on a 16-yard pass. Leon was true on the extra point.

That touchdown was followed by an 11-yard scamper from Ken’Yontae Pinkard and Jakyron Lacy 7-yard tote.

After a 15-yard penalty on the Raiders, the offense set up shop at its 25-yard line.

Adamson then found Collen Covington for a 32-yard pick up.

Xavier Smith got the Raiders on the scoreboard with a 32-yard catch from Adamson.

Erick Bustillos was true on the point after attempt.

John Tyler put the finishing touches on the win with a Crawford interception return for the touchdown. Leon nailed the extra point.

One season ago, McKinney North rolled to a 90-32 win over Wylie East in 7-5A Div. I at Wylie ISD Stadium.