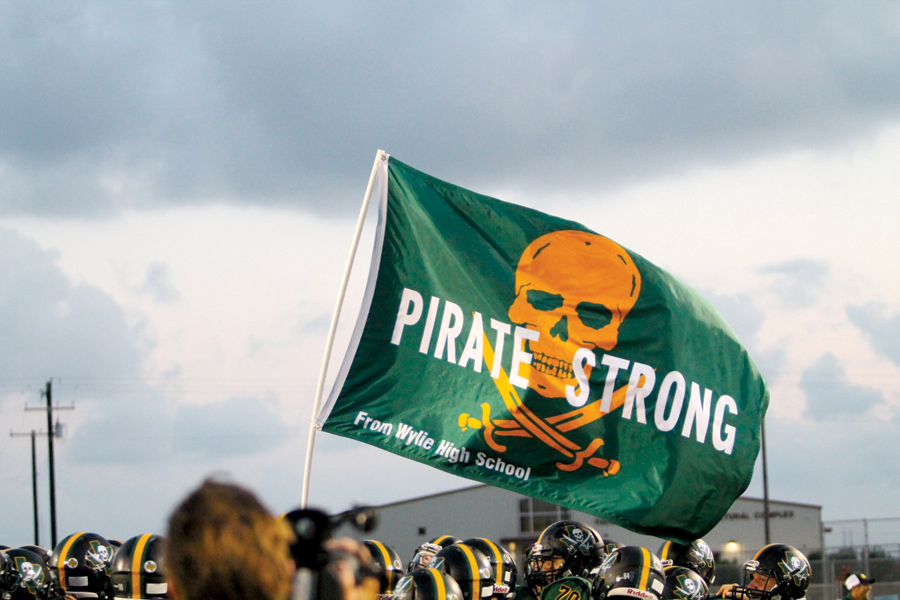 Wylie High School Pirates gave the Rockport-Fulton Pirates a special flag when they attended a football game Friday, Sept. 22 as a show of support for students whose school was damaged by Hurricane Harvey.

“Separated by miles, united as Pirates!”

That slogan connects the Wylie High School Pirates to their brethren in Rockport who witnessed the destruction of their school when Hurricane Harvey blew ashore Aug. 25.

Because of the shared team names, WHS students conducted fundraisers and received generous donations from the community in order to make a bus trip south to cheer the Rockport-Fulton football team when it played the Ingleside Mustangs last week.

“We are going down there to serve, to make noise so those kids feel like they have some support,” WHS Principal Virdie Montgomery said.

The eye of Harvey came ashore at Rockport and devastated the community, destroying the high school, middle school and football stadium, and seriously damaging other campuses and the administration building. Rockport-Fulton Independent School District schools are closed until Oct. 9 when portable buildings are expected to be set up and functioning. Students are attending classes in nearby Sinton and Gregory-Portland schools until they can return home.

Because the football stadium is out of commission, the R-F Pirates hosted the Mustangs at Warrior Stadium in Corpus Christi.

Montgomery pointed out that Wylie Independent School District sponsored a donation effort to collect food and needed items for Hurricane Harvey relief, but WHS students wanted to do more, especially since their Pirate peers were suffering.

For the full story see the September 27 issue or subscribe online.