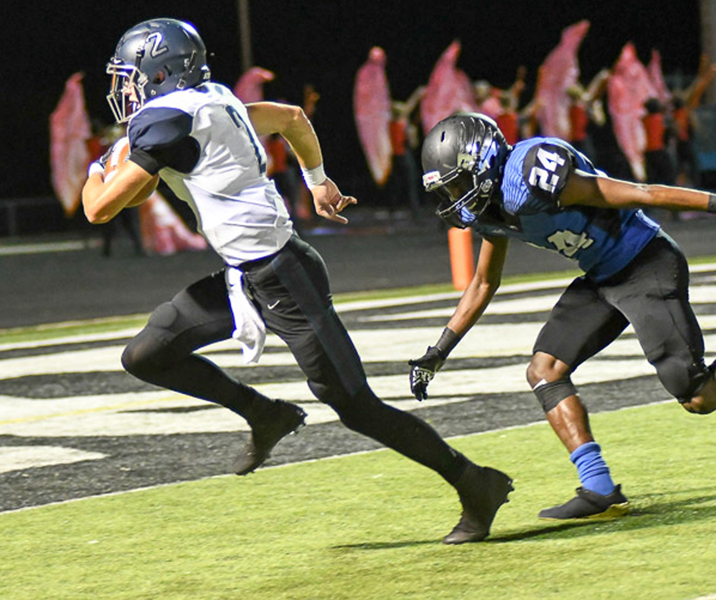 Wylie East quarterback Zack Haaland motors to the end zone for a touchdown during last Friday's 70-65 loss at North Forney.

East hosts Poteet less than a week after shootout in Forney

FORNEY — As the Raiders head into Thursday’s home clash with Mesquite Poteet, they have a good idea of what they want to do and what they don’t.

Specifically, East would love another offensive performance like the one they had last Friday against North Forney at City Bank Stadium. It was one that featured six touchdowns from Corbin Johnson, as well as a fine performance by sophomore Zack Haaland, who tossed two scoring throws and ran for another six-pointer.

Unfortunately, the game also featured a less-than-stellar defensive performance that allowed the Falcons to move up and down the field. The final result was a 70-65 loss that dropped East to 1-3 overall and 0-1 in District 15-5A.

“I would say the offense was good, and the defense was worse than bad,” head coach Joe Lepsis said after the game.

The Raiders aim to turn things around against the Pirates, who are coming off a high scoring 49-35 district win over Forney. In other 15-5A action, Highland Park slammed Lovejoy 50-7, while West Mesquite waxed Royse City 41-3. After playing Poteet, the Raiders will have a bye week, which will offer the chance to rest and refocus.

(To view the entire story, check out the Sept. 27 edition or subscribe online)