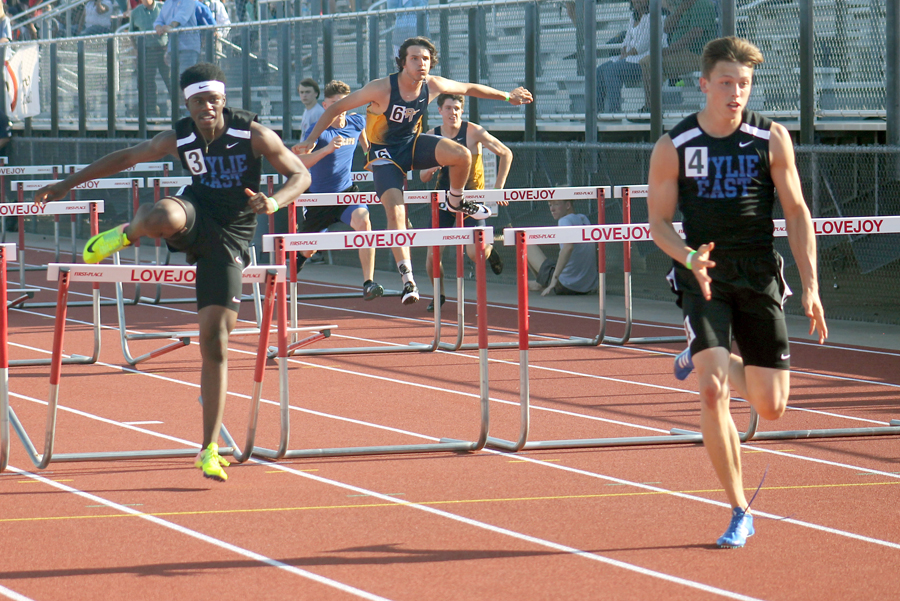 Wylie East's Justin Young, front, races toward the finish line and first place in the 110 hurdles during last Thursday's 110-meter hurdles. Just behind him is teammate Kieron Hunter, left, who finished second. Each will run this weeked at the Region II meet in Arlington, where Young also will compete in the 300 hurdles. 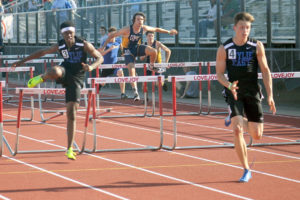 Wylie East’s Justin Young, front, flew past the opposition the entire track postseason, easily winning the 110- and 300-meter hurdles at the district, area, regional and state levels. Just behind him is teammate Kieron Hunter, who qualified for state in 110 hurdles.

Success is almost a given when it comes to athletics at Wylie, Wylie East, Plano East and Sachse.

School year in and school year out, from August through May, elite performances are the norm in almost all competitions. The 2016-’17 season was no different, as each school recorded its share of on-field success.

Over the course of two hours, Young, a senior at Wylie East who is scheduled to attend the US Military Academy at West Point, captured the gold in both the state Class 5A 110- and 300-meter hurdles at the University of Texas’ Mike Myers Stadium.

In doing so, Young became the second East representative to win a state title in the school’s short history; the 2015 Wylie East girls’ soccer team was the first.
Young, who had dominated the 110 and 300 races during the district, area and regional competitions, finished well ahead of the pack in Austin. He captured the former in a time of 13.95, and the latter in 36.90. Wylie East teammate Kieron Hunter, a junior, was fifth in the 110 with a time of 14.36.

The latter qualified for state by earning the best third-place finish out of all four regions.

The roads to East’s athletic accomplishments started in the late summer and early fall, when both the volleyball and football teams began practice and non-district play before moving onto District 15-5A competition.

First, the Lady Raider volleyball team made the playoffs, only to fall to Hallsville in the first round. East’s football team’s pounded into the postseason with powerful running game spearheaded by Eno Benjamin and a solid offensive line. It all ended in the third round with a 27-20 loss to Lancaster. East’s girls’ cross country team showed it had endurance, as it qualified for regionals.
(To view the entire story, check out the June 14 edition of The Wylie News)