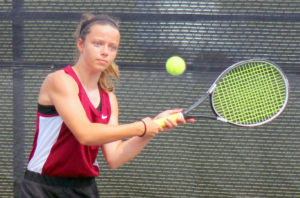 Kate Vinson has her eyes on nothing but the ball during her victorious match this morning against Denison. Wylie will next play on Tuesday, Aug. 15 at home against Forney. (To view more photos from the Denison, click on the picture above)

WYLIE —The Pirates and Lady Pirates nipped Denison 10-9 on Tuesday morning, thanks, mainly, to the fact that Wylie swept all of the boys’ singles and doubles matches. Their next opponent will be Forney, who visits Wylie on Tuesday, Aug. 15 for a 4 p.m. contest.
Winning Matches for the boys were Stephen Tykoski, Jordin Ly, Grant Winger, Landon Brownlow, Bryan Vo, Garet Cooper, Parker Zucha, Davis Roe and Kevin Nguyen. Three Lady Pirates, Mallory Dover, Kate Vinson and Caraline Dufrene also pulled out victories.